I can honestly say I didn't expect to see a film which took inspiration from Twin Peaks, The Exorcist and Go, creating an entirely new and unique experience. Such it is with Ava's Possessions....a movie which dabbles in a mixture of occult, mystery, humor, and the weird with utter aplomb. It's currently on Netflix, and you need to catch this one if the concept of a film with such weird DNA appeals to you, too.

Ava (Louisa Krause) wakes up from a prolonged 28 day possession, held by a demon which has used her in those four weeks to do unspeakable things. A battered family wrestles with the reality of her exorcism, conducted by a rather matter-of-fact priest in a world adjacent to our own, where possessions are literal events and the law even accounts for them. You can, it turns out, commit crimes while possessed and in these circumstances the law allows for you to go to a form of "spirit rehab." Since Ava, now decoupled from her demon, needs to deal with the reality of what happened she chooses the spirit rehab classes over a mental institution or jail.

As Ava works with rebuilding her life she finds clues about what her demon was up to...and they don't all add up. Her family wants her to forget, but her therapy needs her to remember and make amends. As she delves more deeply into the mystery I found myself impressed with the film's ability to walk the fine line in tone and feel between a Lynchian Twin Peaks and a fast-paced Gen X Go, even as the menace of a possible Exorcist event looms over it all (not such a difficult thing to imagine in Twin Peaks, of course!)

The film is darkly humorous, though not camp or otherwise outrageous. It does expect you to roll with the logic of a universe where possession is just something the courts occasionally both deal with and recognize as a valid defense. If you've played games like Bloodshadows or Unknown Armies this won't seem so odd...hell, if you've ever read a Dresden Files novel it will seem positively germane!

Ava's Possessions managed to surprise me in a way I really like: a genuine new take (or twist) on other more heavily trod fictional grounds that suddenly managed to make the genre mashup feel completely new and fresh again. I clicked on this one at random but boy did I get lucky with the pick this time. Check it out, you may be very pleasantly surprised too. 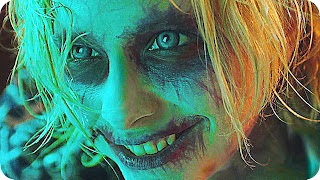 Posted by Doctor Futurity at 11:11 PM