Races of Enzada
Enzada is home to many unusual species, and amongst those species several are sufficiently common as to serve well as player characters. Some races have alternate names in Enzada, listed below in parenthesis:

Other races certainly exist in Enzada, but may have travelled to the hub from foreign lands; the hub is the connecting point of three great continents, and many races exist in those other lands that are foreign to the Hub of Etyri. 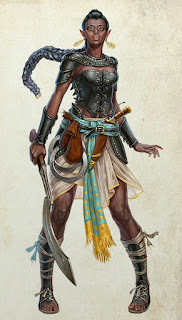 Elves of Daharesh
Elves call themselves “The people of Daharesh” after a legendary hero who brought the elves to the world at the dawn of creation. Their origins are believed to exist in the depths of the In Between, and so like the Div they claim allegiance with the spirits and outsiders that sometimes escape that realm, even if they are far removed from it.

Most of the Daharesh elves proudly identify themselves as the ancestors of the ancient Inhuridan Empire, a legacy that once long ago was a mark of shame in the eyes of many. Time has a way of healing all wounds, and after five thousand years the memory of the Inhuridan is a historical curiosity, recognized as a great shaper in modern Selindari culture.

Most elves know that the truth of the old empire is only partially known in most modern historical texts: the Inhuridan Empire was many races, but the elves, in their longevity and wisdom, benefited greatly in that era and also took much of the blame when the empire at last fell to revolution and strife.

Once the empire was cast down, the daharesh lost their way and renounced civilization, stealing away in to the deep wilds. Nonetheless, Daharesh still have an unusual fascination for ancient sorcery and magic, and can easily become terribly addicted to it. Some other races with long memories have never forgiven the Daharesh for their ancient indiscretions, either. Humans may fancy the old tales as mere legends, but a handful of other long-lived races know it all to be true.

Because of their ancient tether to the In Between, many elves spend a great deal of time seeking out ways of transmigrating into the Space Between, to search for the legendary home of the elves, sometimes called The Green.

Traits: The Hyadari high elves are taller than men, with lean bodies, pale gray skin, and slender ears. Daharesh are known for their gaunt appearance, and for being very long lived (500 years or more). The wilder wood elves are smaller and more suited for forest living, while the Zakhili drow are also smaller in build and well-adapted to living in the darkness of the underworld.

Daharesh Statistics: Physically Daharesh are identical to elves and drow, and indeed both breeds can be found. The subterranean daharesh call themselves the Zhakil (use drow statistics) while the more gracile Kindari are the wood elves and the Hyadari are high elves. 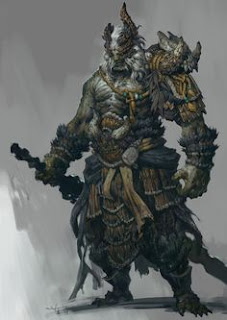 Warrior Thralls: the Sarnatha Orcs
Sarnatha orcs today are a shadow of the greatness they once held. Tales speak of how the first Sarnatha were once Daharesh who were corrupted and twisted in to a fierce warrior-race to serve as the shock troops for the Inhuridan God-Kings in their endless wars, but today the  Sarnatha are a scattered lot, led by chieftains who seek to glimpse their lost greatness through petty war and raids.

The orcs are unique in Enzada in that they hate the "gods" and subscribe to the "all gods are just powerful spirits" philosophy. The orcs eschew priests in favor of warlocks and demonologists who seek to control the spirits to their own gain. A clerical orc follows the philosophy of Sarnathic Pragmatism, and specializes in manipulating certain spirits to his or her own gain. Most Sarnathic clerics as such are lawful in nature, but they lack the restrictions of most clerics in terms of alignmnent vs. domain choices, being able to choose whatever they see fit.

Sarnatha orcs still gain a patron and antagonist aspect, but as they do not see these beings as true gods, they instead regard them as malignant or favorable spirits, respectively.

Traits: Sarnatha are hulking, brutish men who exhibit a primeval appearance, and a modern man of our world might easily mistake one for a neanderthal in appearance. They are broad but relatively short, and have wickedly pronounced canines.

Sarnatha Statistics: Sarnathan half-orc breeds can be played as characters and use the half-orc statistics. In the world of Enzada “orc” is an ancient word from the Daharesh tongue used to describe filth and treachery one and the same. Naturally the Sarnatha prefer their ownchosen name of “orc,” which simply means “man” in the old Imperial tongue over the derogatory elvish word for their kind.
Posted by Doctor Futurity at 6:00 AM