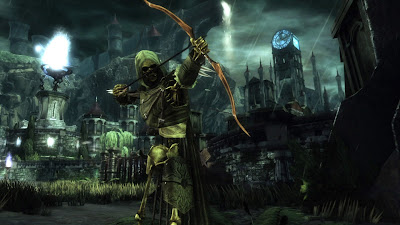 Neverwinter Online has been out for a little over three years now, and judging by the regular updates on WotC's home pages it appears to get a new content update every time they release a book expansion for D&D 5E these days. I had dived in to Neverwinter back in 2013 (an initial impressions review here, followed by my "lost interest" phase here) with all the hope that it would live up to its predecessor, D&D Online from Turbine, which I had played extensively and was quite invested in.

Lomng story short: Neverwinter, in 2013, was not quite what I needed to replace my addiction back then to games like D&D Online and World of Warcraft. In 2013, that is.

Cut to 2016! I've all but given up on ever truly understanding or appreciating the nuances of Guild Wars 2, and while I continue to play and enjoy The Elder Scrolls Online, I have also grown to wonder why it feels like all quests in ESO seem to fall in to one of the following three categories:

1. Bored noble elf who is tomb robbing/inspecting ruins/digging for artifacts/just being a prick deigns to let you suffer through the task on his behalf, and usually with little acknowledgement of credit.

2. Angry/sorrowful ghost either tries to stop you from righting a wrong it did, or begs you to wright a wrong it either did or failed to stop in life.

3. Desperate soldier convinces you to do what his entire army appears unable to do, mostly because they are apparently standing around waiting for you to show up and end the local conflict on their behalf.

Yeah....after a while there's a pattern that emerges from many TESO missions, and not even the awesome Razum Dar can save you from a sense of bored familiarity at these moments.

Enter Neverwinter! With a recent modest upgrade in my PC (to a better i5 setup with a 960GB SSD) thanks to a friend of mine, I've been able to run certain games at max or near max capacity that used to chug on my older rig. Neverwinter was on my "see how it runs now" list, and this weekend, recovering from an illness, I had some time to kill....

Anyway, it turns out Neverwinter has gotten much more robust than I recalled, and had really fleshed out. I still need to play longer than the 23+ hours I sank in to the game leveling a half-dozen characters up to 18-20th level, but I spent a healthy amount of time with Forge adventures as well as taking the time and effort to figure out the bizarre coin economy that Perfect World likes to implement in all of its titles, a sort of weird freemium shell game that they keep in place so you have to be careful figuring out whether you need certain marks, zen coinage bought wish cash, astral diamonds acquired through "means most obscure," auction house trades and still others that don't seem to become relevant until much later in the game. It's not probably much more difficult to decipher than the way such coinage/marks have worked in other titles such as WoW, but the inclusion of RMT in the process makes one want to be careful....

But really, that was only about 5% of the process. Once I had the inventory/item/crafting nonsense figured out so I knew what stuff was relevant and what I could effectively ignore for the time being, then it was much easier to focus on enjoying what the game had to offer that I was actually interested in. Also, I spent about $10 to get some zen coinage, which I can tell you two things about:

1. I bought some keys for the lockboxes, and outside of some training manuals for companions I was nonplussed at what I was getting.
2. I converted some Zen into astral diamonds to pick up companions and stuff on the auction house. What I discovered was that certain things were worth it (if the AD cost was low) but most stuff in the AH was vastly overpriced for the level I was at. If i make it to 70 I'll let you know if that changes. 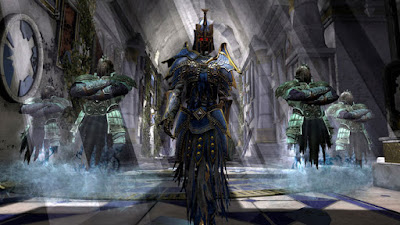 First, the storylines in Neverwinter have grown considerably since release, and if D&D 5E has a module release out, it's also in Neverwinter as a scenario pack. The scenarios appear to all be free; they get your cash through zen sales to buy vanity items, special gear and gods know what else. Fine with me! It does so far appear that you can ignore the RMT element of the game and play what one might call "the base game" with no loss of experience.

The basic storylines up to level 20 remain quite entertaining. I hadn't gotten past level 12 when I played before....I really lost steam back then....and it felt like leveling was going faster and making more sense this time to me. An effect of visiting it at the right time, or a reflection of changes and improvements? I couldn't say.

Then I dived in to the Forge scenarios. When I was last playing Forge was fresh and weird but appeard to be very limited. Well, it's still kind of limited, but between 2013 and now people have really taken the Forge system to the nth level. I played some amazingly interesting scenarios, and finding the cream of the crop was now quite easy, with various agents and billboards everywhere providing you advice on what to explore.

Some of the Forge scenarios were so good I took notes on ideas to steal for my weekly tabletop session. That good.

I have one character of each class type going on right now. Sadly there are only seven classes currently in the game, up 2 from 2013. I had sort of hoped they would have expanded it a bit by now. The classes still have a style/feel closer to D&D 4E in terms of language and thematics, but don't let that dissuade you....those thematics actually convey quite well in an action RPG, which Neverwinter most definitely is.

Back when I was into it before I had bought an extra character slot or two on sale, and had gained access to drow and tieflings. Since then, dragonborn and some weird elf variants have been made available. When I clicked on the "buy dragonborn" option it took me to a page where I could buy the dragonborn pack for an insane $74.99. WTF. In the general in-game store I think I spotted an option for like 2,000 Zen though just to unlock the race itself (no frills), equivalent to $20. Hmmmm. Not sufficiently excited about dragonborn to spend any of that, though.

So Neverwinter looks like a fine game now, with some robust user content in the forge that really stands apart from other MMOs out there. It's got me thinking about it....obsessively!.....which is something I haven't done for a while (in fact only Destiny and The Division have gotten me there in recent years).

I'll report further along as I finally break the 20s in level and start seeing the mid and upper tier of the games. Intrigued to see what the Neverwinter take on the various D&D 5E scenario books are like.
Posted by Doctor Futurity at 9:00 AM