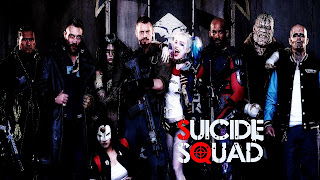 At certain moments in the movie it felt like this could be a cult film in the making. At other times, it felt like the first really genuine adaptation of a comic we've seen yet....hewing as closely to the stories, plots, characters, themes and theatrics of the medium as Hollywood might allow. At other times...it was just damned fun, and no matter how you cut it, if you read a lot of the critics and then go see this --whether you like it or not in the end, you'll realize a lot of critics out there have some really strange reasons for not liking this movie.

I won't go into the critical distress over Suicide Squad other than to say that it's just weird....if the reaction had been more along the lines of "A perfectly okay B movie but we wish it had been more" I could understand that (and a few critics did characterize the film this way, in their defense). But most are frothing madmen about how much they hate this film, desperate for every opportunity to see if they can exceed the hyperbole of the last critic in sheer vitriole and spite (say, Moviebob, ferinstance, who seems to get a serious mad-on about Jared Leto's Joker, too). The critics who like this move seem to come in to two camps: DC fans who enjoyed the film (but might comment on some technical flaws in pacing) and more earnest critics who thought it was fun and are having a hard time processing the hate. I'm definitely an unabashed DC fanboy, and I also found the negative reviews to be much more amusing after watching the movie. To address some of the issues:

1. "The movie doesn't have enough Joker" (or has too much, in at least one critic's case). Jared Leto nails a Joker that has always been implied to exist in the comics but has been hard (on the colored page) to adequately convey: specifically, the guy who would set aside his homocidal lust for Batman and turn it on Harleen Quinzel. Jared Leto? He nails that Joker....I actually bought in to the idea that these two were a sort of "Natural Born Killers" romance in the making, four-color style to the max.

2. "The film spends too much time on Deadshot/Will Smith." Sure, if you hate Will Smith, this might be a bad thing. But he was actually a great co-star as Deadshot to Margot Robbie's Harley Quinn, so it worked out great. He provided a single definable character who was both a villain and still empathetic on which the audience could look to as a relatable character. Even if you didn't grok Rick Flagg, Killer Croc, Captain Boomerang or Katana (who is the most enigmatic), Deadshot was awesome. Unless you don't like Will Smith of course.

3. "The film had too much CGI (mainly toward the end)." Then why are you seeing this movie? If your gripe is CGI, then you need to stop rewarding Hollywood by going to see big budget flicks. If you're a critic, try harder to explain why you think CGI fails, and realize that for most of us, we don't have the "eye" necessary to notice when (SPOILER!) the scene with the Annunaki fighting Tezcatlipoca (Diablo, but insert Aztec god name HERE) somehow looks too fake. We do know that achieving the desired effect shown there with ordinary special effects is really hard. And some of us, like me, remember when conventional special effects were all we had, and part of the audience's implied agreement with the film-maker was to accept that they tried to do the best they could, and in exchange we upped the ante on our suspension of disbelief, and hopefully the two met in the middle. With CGI? Same rule applies. No conventional special effect depicting a fight between ancient gods was going to somehow work better because they used makeup and props instead of CGI. So stop bleating on about this nonsense, and warn us when the FX are actually bad and not just film-critic snob bad. Yes, they could make a scene that works better with regular effect....but it would not be that scene anymore, period.

4. Sundry and various plot elements were not adequately explained/resolved, or character arcs over explained/under-explained. Look, these may be fair critiques of the film, but the question is not "did these elements fail?" but "Did they detract from the story in a meaningful way, that you can convey intelligibly and without hyperbole?' Apparently not, because I found this movie pretty damn easy to follow, and understood why they conveyed information as they did, and when they did. There were only a couple oddities that I'll point out next.

Other great bits I loved in Suicide Squad include:

Amanda Waller: the true villain! I loved her ruthlessness, and the fact that she was more closely modelled on the 80's and 90's era Waller I first discovered long ago. The fact that the entire plot was essentially "Waller gets the go-ahead to form the Suicide Squad, then in her hubris fails to control its most powerful member, who then starts a plan to return the Old Gods to the world and take control, so the rest of the squad gets to clean up her mess" was pure gold.

Joker: that wild ride of madness in Gotham was just a horrible tease. People saying there was not enough Joker in the film are misleading you; the story was about Harley....and there was exactly enough Joker in this for us to get to know Harley better. That said, Leto does such a great job that you do wish there was more of him...a lot more. I really, really want to see that solo Batman film with the Joker in it now. Leto's Joker was an unknown to me, but he really pulled it off here, creating a madman who looks like he could somehow be a romantic interest to Harley and the chief foe of Batman all at once.

Some Head Scratchers and Observations:

1. Why show us the bomb in the subway toward the end? That entire flashback seemed weird and unnecessary. If we'd just seen that to begin with, when we actually saw Flagg and Enchantress in the subway, it would have been fine.

2. The lone Squader who ran and lost his head....while his sole purpose was to get his head blown off by Flagg (thanks to the bombs implanted in their necks), they could have spent two minutes providing some sympathetic (or humorous) back-story to at least aim for a slight emotional reaction to his demise.

3. Captain Boomerang was amusing for several scenes but criminally under-used otherwise. This was a shadow of the jackass who causes everyone problems in the comics.

4. Katana was awesome, and part of me wants to see her spin off in to a real movie, but I have to temper that with the reminder that it probably wouldn't be that interesting....but as part of an ensemble cast she worked out great.

5. I think they should have had a scene where Joker walks away from the crashed helicopter. We could have kept the emotional resonance of Harley thinking he was dead, but being surprised in the end when he wasn't; no one in the audience was fooled for a second into thinking Joker's death was anything more than a feint, so why pretend?

6. I would have loved a scene showing how Waller explained (or more likely, covered up) the fact that the entire incident was precipitated by her losing control of Enchantress to the big brass.

...anyway, needless to say I thought this was an amazing movie, and a fine comic adaptation. Not 100% perfect, but maybe 95% perfect; and easily the most evocative and accurate depiction of a comic to film I've seen yet.

Posted by Doctor Futurity at 11:28 PM