Lingusia, the Age of Strife: Mihidir Trolls in 13th Age

There are several breeds of troll in Lingusia. In the west, beneath the mountains guarded by the city of Lancaster, lie the devious and vile mihidir trolls, a breed apart from the rest. Here the trolls of the underworld worship Thasrik, god of slavery and domination, and they let their infants fight for dominance in foul breeding pits where no family relations are ever allowed. The elite are true trolls of cunning intelligence, but these elite have mastered fleshwarping arts to craft many breeds of troll for specific purposes. A few examples follow.

Note: we playtested these Wednesday night (albeit in an actual play session!) I have modified the stats to reflect a couple "flaws" in the original design....key being making the grunt regen effortless as possible to track.

BTW don't throw a regular troll, a warmage troll and 20 grunts up against 5 level 1 PCs. They will not be amused! 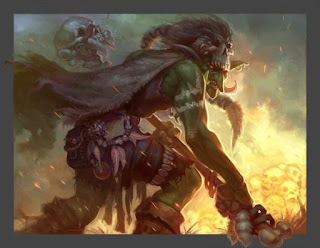 1 Mihidir Warmage
1st level caster (humanoid, lesser giant)
Init +4
AC 17 PD 11 MD 15 HP 26
Black Bolt +6 vs. PD ranged attack against up to 3 nearby targets, 2 necrotic damage per bolt
Claws +6 vs. AC attack, 3 damage; on a 16+ target takes 6 damage from a rend
Dread Growth (once per encounter, on Escalation die 3+); pick one Mihidir grunt. The grunt grows to large size for the remainder of the combat, gaining 20 hit points and doubling its claw and rend damage, but discards its cleaver. If no grunt is available the warmage can cast this on himself, gaining the bonuses instead.
Trollish Regeneration 5: when damaged the mihidir warmage heals 5 damage at the start of its next turn. It has 5 regeneration tokens. It does not regenerate that turn and loses a token if dealt fire or acid damage.

The mihidir war mage is a clever troll of the mihidir kindred, born and bred in the depths of the Ancient City of their kind for war and magic. The warmages are indoctrinated at an early age in to the teachings of the god Thasrik, lord of slavery and domination. They learn to abuse and subjugate the grunts to tortures considered “humane” and “character building” in the eyes of the mihidir elite. Over time, the best are culled from the chattel and taught a mixture of necromancy and polymorphic magic, especially the ability to enhance the already volatile chemistry of trollish flesh. 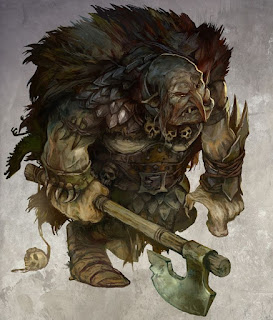 
The mihidir grunts are medium sized trolls by any other standard, but still stand at least 6-7 feet tall against men and elves. Bred in the breeding pits of Thasrik, the grunts know only slavery, subjugation and torture. They are raised and released as dogs of war, chattel to be thrown against the enemy. The average grunt is an adult by age 6 and dead by age 7. 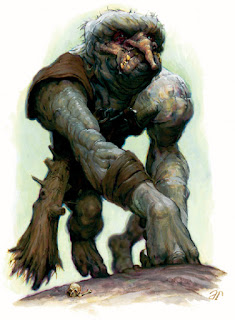 Mihidir Warbrute
5th level huge wrecker (greater giant)
Init +8
AC 22 PD 20 MD 13 HP 220
Claws +10 vs. AC attack (two attacks), 30 damage per hit. If both attacks hit a living target it deals 20 extra rend damage and tosses the target 15 feet.
Siege Strike: If both claw attacks hit, and the target is an object (such as a porticullis or defensive castle wall), then double the damage and target collapses if both attack rolls were 16+.
Trollish Regeneration 5: when damaged the mihidir warbrute heals 20 damage at the start of its next turn. It has 5 regeneration tokens. It does not regenerate and loses a token if dealt fire or acid damage.
The worst spawn of the breeding pits, the warbrutes are shaped and morphed into monstrous savages by the mihidir elite to become living siege engines. The warbrutes are so large, some up to 50 feet tall, that they are often mistaken for giants. They can transport dozens of mihidir grunts and are usually “directed” by a mihidir troll.