Somehow I have not written a review about what is basically one of my top, favorite sci fi/anime/wasteland apocalypse/cyberpunk films. Yes, I'm talking about the 2014 Appleseed Alpha, a sort of reboot/prequel to the Appleseed series which takes a look at the early careers of Deunan and Briareos before they reach Olympus....it's got some story revisionism as well, but nothing that should bother you unless you're a canon nazi. 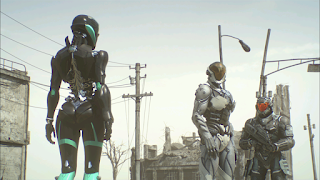 The story focuses on two survivors in post-apocalyptic New York: Deunan, a former soldier turned surivalist/merc, and her once husband Briareos, who was part of a full metal conversion program and is now a Hecatonchiere-Class combat cyborg that is unfortunately suffering from low power and maintenance issues in a New York City that's a skeleton of its former self, a bombed out wasteland ruled by two groups: a gang led by the oni-like cyborg Two Horns, and Atlas, a rogue corporation trawling the rubble for lost weapons tech led by the cyborg Talos. 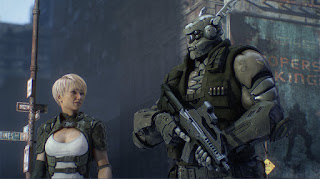 The story revolves around Deunan and Briareos being down on their luck, played by Two Horns, when they stumble across a soldier named Olsen who's on a mission to escort a girl, a young bioroid named Iris (for reasons that become obvious toward the end) that eventually reveal they come from the fabled utopia of Olympus....a place that Deunan was hoping was real and Briareos thought a myth. Talos is after them, and he's got some history with Olympus, and Olsen....

The tale weaves between our two protagonists, their unexpected charges, the amusingly comic Two Horns and his vendetta, and the promisingly evil Talos and his henchmen. As Olsen reveals more of their mission, it eventually becomes Deunan and Briareos's jobs to stop Talos from taking control of a "Final Weapon" of the last war, which could wipe out all of New York (or what's left of it). 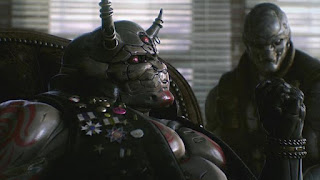 The movie is well paced and a load of fun to watch with some great action sequences. The animation is CGI but has a sort of "light reality" quality to it where it still feels like animation, just very realistic...the result is something which doesn't stress your inner sense of the uncanny valley (at least, not for me). One would not be remiss in thinking that the movie felt like all of the cuts cenes from a video game streamed together into a coherent narrative....it definitely feels a bit like that.

Watch this movie if you've got a thing for cyborgs, a battle armor fetish, a deep appreciation for apocalyptic wastelands, and happen to really want to see what a good anime-style CGI film can look like that isn't made by Square-Enix. I easily give this one an A+ and can't wait for more, which the film ends with the tentative promise of for the future. 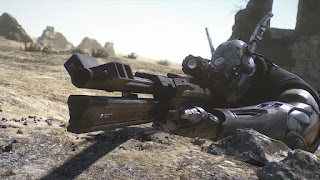 Posted by Doctor Futurity at 10:52 PM

The best D100 based gaming