Dungeon Fantasy RPG powered by GURPS is a Real Thing

ENWorld breaks the news! Look at it right here: 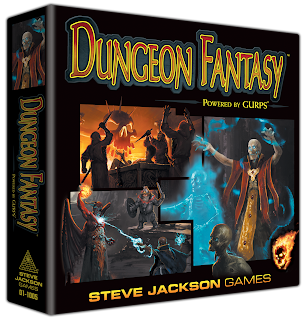 Will incorporate some changes/udates to the 4E GURPS rules

....If SJGames makes this happen, I will be very pleased. I'm sincerely hoping this does well, as it's exactly the kind of stand-alone product that I and many other GURPS fans have said the game needs, and a boxed/print set, no less!!!!

We could see some GURPS revivalism in gaming in the near future all of a sudden. Print remains the "living" realm for gaming, no matter what PDF fans might say....gaming is very tactile, very much an experience in physicality for most gamers who aren't invested in Roll20 or Fantasy Grounds, so a product like this is necessary for the "health" of a game system. Very exciting!


EDIT: If you're not 100% sure about this, imagine for a moment two scenarios:

1. A realistic fantasy gaming system that goes for verisimilitude on a level unparalleled, while still delivering to you a genuine dungeon crawling experience
2. A revival of The Fantasy Trip, or as close to it as we can get in the 21st century

If either of those appeal to you, then this is why you must back Dungeon Fantasy!!!!
Posted by Doctor Futurity at 11:55 AM