Localizing the Icons in 13th Age 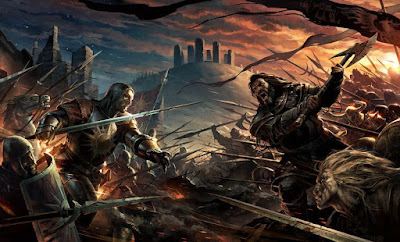 While digging in to 13th Age for a new campaign I ran into the weird wall I call "figuring out how to make the Icons fit." The cool thing about 13th Age is both a blessing and a curse: the game can survive without icons, but it loses something important in its feel and style. But if you embrace the icons, then you must either work within the norms and setting 13th Age provides, or do a bit of work figuring out how they fit in your own world. The game certainly encourages this "make it your own" approach but doesn't offer too many guidelines on how to do it.

If you're not big on world building, the icons are a convenient way of saying "here's 12 important figures that are epically...almost mythically...relevant to the "today" of my setting." But if you already have a world? Then you need to figure out where they fit....or even make new icons to reflect the personalities of your world that don't mesh well with the default icons.

The second problem with the icons is just how to moderate the relationships with the PCs. A lot has been discussed about how to do this, with different styles and themes. What I've gotten out of all of it is the following salient points:

1. No matter how you dice it, the PCs need a chance to roll 3 dice that are tied to something in the setting, letting them get perks (6s) or perks with complications (5s). These are directly equivalent to plot cards/points or other gimmicks that give the PCs a shot at gaining an edge in the coming story.

2. Those three rolls need to have some character. The 13th Age game defines that character as the icon relationships.

With those two elements in mind, it sounds reasonable enough.....but in truth, having no less than 12 major icons players can have positive, negative or conflicted relationships with means the GM might accidentally spend a lot of time juggling unexpected improvisational plot situations with the PCs, and it is often easy to get caught up in some fairly "big" assumptions about those plots (such as the lich king himself taking a personal interest in something when maybe a lowly minion might suffice).

So how to arbitrate this stuff? The various 13th Age tomes offer suggestions and advice, much of which includes ways to think of the hierarchy of the icon's followers and resources and how they might trickle down to the PCs. Don't think of it as a "6" with the Prince of Shadows...think of it as a "6" which gets you a foot in the door of the local thieve's guild that belongs to the parent guild that is a part of the Prince's global network. Or something.

But if you want to parse it out like that, it occurred to me that the icon relationships could, themselves, be subverted. PCs could, in fact, apply those iconic relationships more....locally.

For example, rather than me defining 12 all-powerful icons throughout the known world, what if I figured out who the local movers and shakers were? What if the icons were, instead, the major local powers that have a vested interest in the goings-on of local events, and the PCs were potentially more direct agents, or held closer relations?

In a case like this, say, in my Ages of Lingusia campaign I could make the Icon choices for the City of Octzel Campaign the King and Queen of Octzel, their Vizier, the scheming leader of the Black Society, The lord of the Geomancers and other local figures of prominence. The PCs pick their relations in these icons...these patrons, if you will....and can cash in "realistic" favors on their 5's and 6's. This allows for a more "local" tale which uses the icon relationship dice and even the icons, but by scaling them down to a more "local" level.

Such a method even allows the icons to be introduced at a later date. If the King of Octzel is revealed to secretly served the Archmage, and the agent of the Black Society is really a minion of the Diabolist, then this lets you "escalate" the campaign at later levels, peeling back layers of connectivity and expanding the PCs relationships to the real icons.

This might sound like more work....but to me it feels like a way to make heroic campaigns more "local" and letting the more awe-inspiring, continent-encompassing machinations of the icons become more prominent at later epic tiers.
Posted by Doctor Futurity at 3:31 PM