It's back! After a long absence, I have new horror movie reviews on the way....focused like a lightning rod once more on The Really Awful Horror Movie!!!

Sit back and feast upon the corpse of many a film from yesteryear, oh doomed reader....starting with this maddeningly weird and pointless gem... 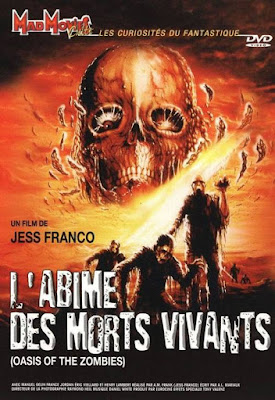 I found this French zombie movie on a 12-pack of films titled "12 Film Flesh Fest: Zombies Unbrained," and picked Oasis of the Zombies to start with completely at random. The film quality was deplorable, with that "copied from a cam focused on an old TV" sort of resolution and jigginess to it. Despite--or perhaps because of--this poor quality the film actually seemed to benefit from it a bit. The box set says it's a 1981 film but wikipedia says it's from 1982. 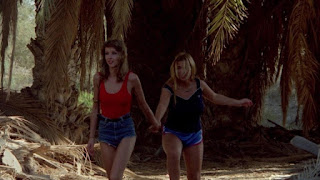 The story tells three loose tales: after a scene in which two gals in short-shorts visit some desert oasis and get eaten by zombies, the film leads in to a fellow discovering the story of his dad in WWII. This is the first "coherent" narrative of a British soldier and his men who face off during WWII with a vile company of German soldiers in the desert known for their mercilessness. After some brief but fun shots of surplus WWII vehicles there's a classic 80's style gunfight at a remote desert oasis in which everyone dies. The sole surviving commander of the British forces is rescued by a local sheikh in the desert and hauled off for a speedy recovery, followed by a swift relationship with the lovely Ayesha who's exact relationship to the sheikh is  a bit suspect. He leaves her and comes back two years later to find out she is dead, the sheikh and his palace mysteriously ruined, and he has a lone infant son. 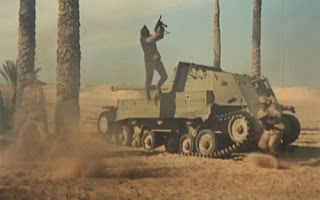 There's also the story of this gruff murderous treasure hunter who, along with a random menagerie of cohorts steals off decades later to find this oasis due to a rumor that the dead nazis at the location were hiding gold there before the British got the drop on them. He and his crew spend the night at the oasis and are promptly murdered by zombies. Only the treasure hunter escapes, long enough to arrive in a nearby city where he goes mad from a zombie bite.

The principle story tying the other two together is the son of the British officer, who now seeks to claim that lost gold for his own, something he gleaned from his father's own writings. So in classic 1981 style he, some chummy friends and a hot girl in shorts with a penchant for taking off her shirt all head off to Saudi Arabia to find the oasis. Naturally they arrive, have some weird encounters in the nearby city, then skip on off to the oasis where sure enough at sundown the zombies come out and try to devour most of them. THE END.

So I can't say it's completely pointless. They had a plot, just not a lot of "surprise" to it. For the limited special effects the zombie heads were kind of neat... 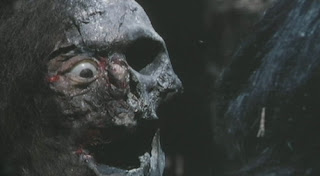 ...but admittedly, watching a bad, grainy copy made that zombie look much cooler than he probably would have in HD. Still, someone took the time to liberally sprinkle worms on every zombie face, and they blend the use of the masks with the actual guys staggering around well enough to evoke that unique, creepy atmosphere typical of horror films from the period.

The acting in the film is (shockingly) a slight improvement over other typical films in the genre from that period, but this is sort of like comparing two rotten fruits and pointing out how one has mold and the other doesn't.

The music was a four note synthesizer. It "worked" in the sense that it fit the era of this sort of film, but it was tedious by any stretch of the imagination otherwise.

So, as the kick-off to the Return of 31 Days of Horror I will give Oasis of the Zombies a solid D+ (the plus being for the cool zombie heads, and the modicum of effort at depicting the oasis shootout during WWII). It does feel to me like one of those oddball films which sprang out of some unlikely combination of circumstances; one guy had access to surplus WWII vehicles, another guy had been making paper mache zombie heads, and a third guy really wanted an excuse to get some actress naked in a eurosleaze film. but then, so many of the films from this period actually are kind of slapdash and sleazy like that, so there you go...

Email ThisBlogThis!Share to TwitterShare to FacebookShare to Pinterest
Labels: horror reviews, movies, oasis of the zombies