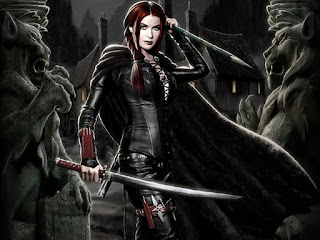 Time to get back on track with my planned mini-reviews of the many downloads available on dmsguild.com! I've collected about 50 books from  the site now. Many of the offerings are pay-what-you-want but most are very cheaply priced. The most expensive offerings appear to also be the most popular, but that rule isn't exact....some of the coolest books I've found have been free, or cost a $1 or less.

This one is Creature Crucible: Dhampirs from Mark Craddock, who provided a copy for review. I'll contrast it with two other Dhampir options that were PWYW; I wasn't quite willing to pay for the other non-free options as the one Mark worked up and the two free options were more than fine for my dhampir needs. CC: Dhampirs provides 2 pages of content (plus a front, back and cover page) for $1.00. The dhampir is a racial option originally provided in Pathfinder (my 3rd edition D&D knowledge prevents me from recalling if he existed in that edition but I am certain it was not a racial option in 4E). The CC adaptation features 1 point modifiers to stats, live twice as long as normal humans, have fangs, can spend a hit die to drink blood and recover hit points, have dark vision and necrotic resistance. The blood drinking effect can be done once, but requires a short or long rest to recover again. You also get some sample name ideas to choose from.

Pros: the CC dhampir is a straight up racial option for D&D which provides a blood-drinking version of the dhampir.
Cons: not much. It doesn't have any subrace options, but other than that, it's quite functional. It's blood drain attack and lack of sunlight sensitivity makes it a reimagining rather than a recreation of prior edition versions of the dhampir.

The second dhampir option is the Dhampir 5E Race Option, a spiffy PDF with 3 pages, 1 of a splash cover and 2 pages of content. Some of the features of this version of the dhampir are identical (or close to it) with the CC version, such as darkvision, long life, and a tendency toward neutrality. However, this dhampir is more robust than normal (with a +2 Con modifier in addition to later subrace bonuses), gaining advantage against poison and resistance against necrotic damage as well as advantage on death saving throws. This is offset by sunlight sensitivity, in which the dhampir gains distadvantage on attack rolls and perception checks when in direct sunlight. This is also thematically appropriate, but this version of the dhampir does not drink blood (or at least gain any measurable effect from attempts to do so).

Pro: For a free option its not bad, and it provides three subraced options.
Con: My DM sense makes my skin crawl when reading the subrace abilities. They are cool --too cool-- and move the dhampir from a "fellow with vampiric ancestry" to "mini vampire, but with no blood drinking rules or limits." YMMV but I would be hesitant to let this one at my game table...maybe for a trial test?

The third dhampir option, Playable Race: The Dhampir, available for viewing at the minimum cost of free is a 6 page booklet with 3 pages of content. This dhampir starts off with a +2 Charisma modifier, darkvision, and a tendency towards chaos and evil rather than neutrality, and he also comes with fangs. Unlike the CC dhampir this one can drink blood and gain temporary hit points as an action, and without restraint equal to your Charisma modifier....so the only limit is the temporary hit point rules themselves (which prevent the effect from stacking iirc). Oh, this dhampir can live to be 700 years old, too, and has no sunlight sensitivity, officially making him the most badass dhampir yet.

Breaking from convention, this dhampir lets you pick subrace by your origin race: dwarf elf, halfling, human, gnome or orc. Apparently tieflings, drow and dragonborn don't produce dhampir offpsring. The bonus features for these subraces are just elements of the base race (ex: stonecunning for the dwarf).

Pro: This third option isn't too bad, and the temporary hit point gain isn't all that powerful, since it can never be more than 5 hit points at a time. Being able to have a dhampir that is not human is also a plus.
Con: it's not an entirely faithful adaptation of prior renditions of the dhampir, but it does work. It's missing sunlight sensitivity, and the bite attack is not typical of the prior dhampirs of older editions.

The Forbidden Bestiary: Creatures of Shadow is actually a monster tome, but includes a playable version of the dhampir. This version is a template, applied to any creature born a dhampir. The racial modifiers are in line with 5E principles, but the key effect identified here is blood drain from a bite, which can be quite formidable (2D6+proficiency bonus) in both damage dealt and healing gained. The limit is that the dhampir suffers a hit point loss and HP maximum reduction until he feeds again.

Pro: this is a cool template and lets you make anything a dhampir if you so desire.
Con: it's really better as a DM's template for monsters, and I wouldn't let players get their hands on it.

Get the Frobidden Bestiary since it's useful to you as a DM, but for dhampir racial options I think I'd suggest using the Creature Crucible version or the Playable Race version. That said.....both versions could benefit from having sunlight sensitivity added to reflect the race's legacy of aversion to daylight, and then you could add subrace traits such as "daywalker" that remove that sensitivity. The dhampir could benefit from a more expansive tome of options down the road, and either of these interpretations would be a good starting point. I am not a fan of hit die-cost superpowers however, so am leaning against the use of the Dhampir 5E Race Option version. 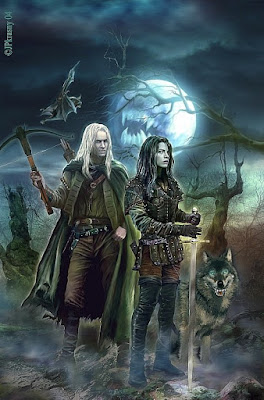