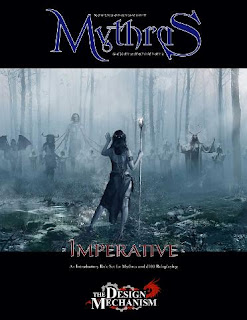 Over the weekend The Design Mechanism released the Mythras Imperative, the first book in the revamped, re-named system formerly known as Runequest 6. You can download it for free here, or pick up the print version at lulu here. The new introduction to the system precedes the release of the updated core book, which as I understand it may be available/announced sometime after July (if rumors are right) and will mostly be a slightly revised version of RQ6 without the ligatures.

That said....the new introductory book gives you everything you need to run historical, modern or SF games with a nice lite version of the system that is nonetheless a complete ruleset, including relevant skills and equipment (just no magic system). After reading it I realized this is easily sufficiently complete that you could pair it with --say-- Luther Arkwight and have all you need to move forward with Mythras for regular gaming. Check it out!
Posted by Doctor Futurity at 6:00 AM