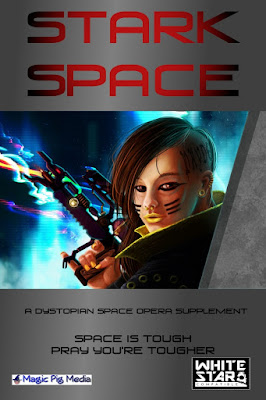 If you like White Star then you should be familiar with --or want-- Stark Space, a White Star sourcebook that adds low-tech hard SF cyberpunk thematics in to the system with three new classes, a range of racial options suited to a transhuman cyberpunk future, new equipment, cyberware, and other useful stuff. As it turns out Stark Space is available in POD now at Lulu (right here) or print (here).

Stark Space is a resource expansion for White Star....it doesn't change anything, instead adding a range of new options that you can use by itself or in conjunction with whatever other elements of White Star you want to use to customize your own setting. It stands well on it's own, however, giving you enough material for some decent cyberpunk gaming.

Stark Space breaks down as follows:

Life in Stark Space: a short overview of the setting. This is less a primer on the universe of Stark Space and more a set of implied assumptions; the universe of Stark Space is our are of the galactic rim, colonized in the not too distant future in a universe where interplanetary travel is slow and costly. No one's met sentient species yet, megacorporations and organized crime call the shots, and technology is not too crazy; this is a setting which can handle the universes of Alien, Firefly, Event Horizon, Blade Runner, Akira and other "realistic future tech SF" settings.

Classes: the system uses character "strengths" to reflect class types. Thus we get the Brains, the Face and the Muscle. Each class provides a robust range of abilities, and could function nicely in a "three class" system. That said, you can mix and match other White Star classes easily enough....I'd probably let the mercenary, pilot, robot and an engineer and medic option in as well, but if you stuck to core three I think you'd be fine.

Skills: Despite being S&W White Box-based, it's popular to strap on a skill system to White Star since SF games tend to need it, and Stark Space adds a decent skill system for your use. Twelve skills plus languages let you modify classes to suit to taste. The mechanic is 2D6-based (no shades of Traveller here, nope), in which you roll equal to or under a score derived from 2 stats added together and divided by three.

Races: since this supports a near-future cyberpunk/transhuman/humanocentric SF style, Stark Space offers some racial options: straight humans, max-genes  (genetically modified humans), Simulants (androids from Alien or Blade Runner style simulants), and Psis (humans who developed psionic potential). Of these, the last one may or may not work well for your intended style of near-future SF, but if you're creating a setting that pulls from the full range of resources for this near-future genre then having all four is useful. Missing from this is hardcore transmhuman concepts, but I suppose that would make for an --ah-- interesting challenge in how to model such in an OSR system.

Weapons & Equipment: favoring lower-tech gear (i.e. no zap guns or particle beam weapons) Stark Space offers up 8 slug thrower options, 4 heavy weapons, 6 melee weapons and discussion on armor types. The cyberwear section includes a saving throw mechanic for what happens when adding new cyberwear goes wrong, and is focused mainly on old-school cybernetic enhancements, with ten new options. Following that is a section on drugs, with 9 funky drug types and a random overdose/side-effect table. Other equipment concludes this section with a resuscitation pack, nano-disguise kit and info on buying simulants. The resuscitation pack is kind of neat, allowing the dead to come back...but with some permanent results of their close encounter with the crumpled character sheet effect.

Overall it's a good range of equipment for the genre (supplementing the core rules), but the lack of transhuman "wetware" seems like an oversight to me. You can easily just reskin the cyberwear, though....but with tales of CRISPR rolling around today, I think any effort at near-future SF that ignores the reality of wetware in the future is either a foolish oversight or deliberate effort at retro SF kitsch.

Optional Combat Rules: you don't need many in White Box games, but situations do like to rear their heads at time. We get one whole page here, but it covers some useful new info on adjudicating hand-to-hand combat and gun fights involving spray-and-pray combat. Nothing offensive here, just useful moderation in the White Box style.

Antagonists: This section adds a range of foes (totaling 19 stat blocks) for you to use in your Stark Space campaign. All of the foes are "genre appropriate" so if you want weird stuff other White Star books may suit your needs. The only "weird" foes in the list is a viral zombie; the game studiously avoids offering up its own take on the alien xenoform, amazingly.

Stark space wraps up with a serviceable character sheet. For those interested, the art in the book is mostly from royalty-free art packages, and is a nice genre-appropriate selection, nothing exciting but no eye-sores, either (only the cover comes off as a bit bland, but also inoffensive).

Coming in at 38 pages (with the last page as OGL) it's a compact 8.5X11 inch tome which will work well for you if your goal is to do a more contemporary "near future" or "hard SF" campaign. I can't recommend it enough.