Over the weekend I tried to find time to really dive in to Runequest 6/Mythras, per said plans from last week, as my Saturday group needs an alternative game for the next three weeks (a key player is out for three weeks and people don't want to leave him behind in White Star). RQ6 seemed like a shoe-in at that point....except....

I've suddenly had an epiphany: I am a middle-aged guy with a very busy, demanding job,  child (late in life) and family that consumes a lot of time. In the last eighteen months I have purchased a lot of games, among which include all sorts of giant, lavishly illustrated tomes, laden with rules, mechanics and fluff. And then there's all that OSR stuff I've actually read, and could actually run. Hmmmm.

As a result, I'm eyeballing Magic World again. Weird, because of the whole "abandoned by Chaosium" deal, but it' really about the level of detail I actually want out of a BRP engine right now. RQ6 is awesome.....but maybe not for a guy like me with a serious time budget.

EDIT: Actually I know what I need to do: convince the group to try out either Mutant Future or Other Dust. Been dying to run both for eons now but never have.

EDIT #2: Although Other Dust is now on the menu, I am DETERMINED to run RQ/Mythras! But I had to set some limits...thank goodness this game is basically "modular." So we're using Runequest Essentials instead of the main book for char gen, limiting magic to folk magic and theism. Then I'm letting everyone pick from the racial options only in Classic Fantasy. I'll introduce sorcery through play, which gives me the extra time to re-read the rules....which, despite basically just being from RQII, added a lot of subtle complexity to the process that I totally don't remember from my RQII days. Orrrrrr maybe it's just been a while. Either way, I am staying committed; I really want to run RQ again....it has been too long. 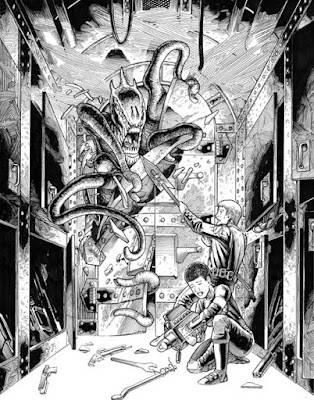 Posted by Doctor Futurity at 9:24 PM