Excellent Overview of the Runequest 2.5 Playtest rules at Timinits & Trolls

Gianni Vacca has a great and lengthy post on the new Runequest 4th edition rules in playtest here. He mentions the idea of it as "Runequest 2.5" and I kind of like that monicker, too, since the game seems to be jettisoning most of what I identify as Runequest and moving back to an earlier era (which for me, means the new game is basically an update from the way I played it 1981-1983; all other RQ experiences I had have been with RQ3 and MRQ/RQII/RQ6). Unfortunately I really didn't "play" in Glorantha as such, using the ideas in that edition to forge my own thing, so the upgrade in focus on the RQ2.5 to be very Glorantha focused is mostly leaving me interested in the broader picture here of how the mechanics work, and what they suggest the future BRP revision will look like....but that said, if you are in to Glorantha-focused systems, this one sounds like it's shaping up to be stellar. Check it out. 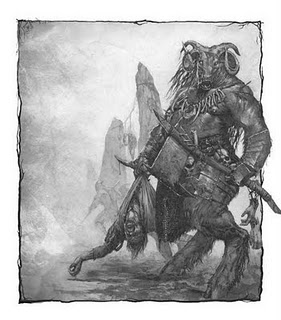 Posted by Doctor Futurity at 4:39 PM

Email ThisBlogThis!Share to TwitterShare to FacebookShare to Pinterest
Labels: Runequest