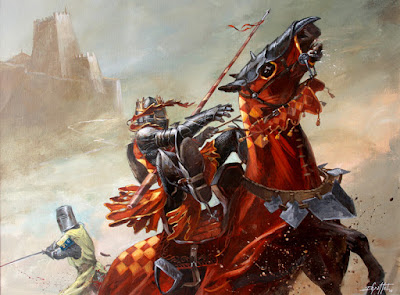 Diving back in to Runequest 6 recently has had me thinking about the pacing of RPGs. Not just "mechanical pacing" which, to give you an idea, is a major issue for various editions of D&D as well as more elaborate systems like Runequest....but also the inherent design expectations of just how much time you should anticipate investing in a campaign.

Pretty much any system can support short campaigns and one-shots, but such campaigns rarely offer a glimpse in to the long term play mechanics the system espouses. Some games do seem to factor this in to a certain degree, possibly using a fast advancement mechanic like a carrot on a stick to entice players to play more....I think D&D 5E's first four levels are designed this way, for example. Runequest 6 is interesting in that you get some potential to level up at the end of every session (unless you have a stingy GM) with skill roll chances. However, the real potential in advancement requires taking the time to hoard those skill rolls so you can boost attributes or pay for the cost of learning new skills and finding new magic...which can be a time consuming process and requires two things: that the players look for downtime to train and advance, and that the GM give them that time. By contrast, a character can start a career at level 1 in D&D and end up level 20 mere months later in a very fast paced campaign.

I've never seen a Runequest game go long enough in any edition to experience the length and breadth of this sort of advancement (my longest RQ campaign went about 24 sessions); most of my campaigns are structured around 6 month to year-long storylines/events which presume that we've ultimately got only so much time and need to maximize how we use that time; a game like D&D 5E lets us plow through a pretty decent 10 level campaign in 6 months, for example, with advancement baked in to the process. On top of that, RQ6 is more granular; when you have a combat it will be both higher stakes and more detailed, and take more time. As a result, less "gets done" in a certain sense, while in D&D you'll have more bang for your buck. This is, admittedly, a contrast of two very different flavors and not a statement on either system, but if I had to draw an analogy I'd say RQ6 was a great system for running "Master and Commander" while D&D was a natural fit for "Pirates of the Caribbean." And this isn't even addressing prior versions of D&D such as 4E or Pathfinder, where you also ran into slowdown due to mechanics as well.

Other systems, such as 13th Age, actually build a range of options in to how the GM can handle advancement based on the needs of the group while also providing you the best and fastest tools for quick mechanics. You can run a campaign that lasts dozens of sessions before reaching level 10, awarding new levels at the pace the GM wants. You can do incremental advancement which lets the GM dole out micro-rewards over the course of play. Or, you can do a ten-session, ten level campaign in a glorious zerg rush to the top. I used to be annoyed by 13th Age's system and even worked up some house rules for an XP mechanic, since XP is a great way of providing a trackable "reward mechanic" without actually disrupting the leveling process. But now? I realize that if you want to experience the full game, and you've only got 10 weeks to do it, 13th Age offers you a pretty compelling option here.

There's an entire subset on this issue as well: OSR games. They offer mechanical simplicity but also let you scale them quite nicely to suit the GM's tastes. Played by the book, for example, S&W with GP as XP leads to some quick advancement over time, and people don't slow down until hitting levels 6-8ish. You can also get a lot more done in one OSR session than any other game I've mentioned in this post. There's something incredibly attractive about a system that offers a guaranteed "maximum return on fun" and the OSR systems definitely do that.

In the end, this is mostly a thought exercise for me, and a way of identifying why maybe I end up playing certain systems a lot more (D&D) while pining for others but never actually playing them that often (RQ6). I think a protracted campaign in RQ6 that lasted years would be amazing, a chance to see the system shine....but perhaps, ultimately, I am more of a "Pirates of the Caribbean" kind of guy, and thus why D&D always ends up as my go-to game.