Eradariin: The Red Elves of Chirak for Runequest 6/Mythras 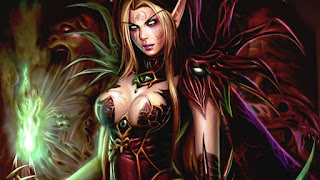 Eradariin, the Red Elves of Chirak in Runequest 6/Mythras

The Red Elves, called Eradariin in the old elvish tongue, are elves who were enslaved in the Goblin Wars and later freed themselves, adopting the worship of Shaligon as they did, and assuming the mantle of control over the goblins. They are normal elves, but ritually scarred and tattooed in honor of Shaligon, and they revel in the vile ways of goblinoid culture.

Although the eradariin are not all evil, it is difficult to be good in a society which is dominated by the worship of Shaligon and the veneration of chaos. As such, red elves born of good alignment are usually found out and killed, or escape to the surface world to find freedom. Luckily, the depravities of the red elves on the surface world are largely an unknown, except for

regions such as Correnstal where they are manifesting as a dangerous military presence.
Languages: Red elves begin play knowing both elvish and goblin as languages, although they do not start knowing Tradespeak, but instead know Lower Common, the trade language of the Lower Dark.

Eradariin Traits: once a breed of high elf, the eradariin have been deeply scarred and changed by several centuries of assimilation into goblin culture and the worship of Shaligon. They have the following unique traits:

Ability Scores and Base Traits: Eradariin are identical to normal elves (per elves as depicted in Classic Fantasy).

Marks of Shaligon: The red elves brand themselves with ritual scars and tattoos in veneration of Shaligon. Any red elf may elect to start with the Tattoo Mage skill at character creation (as a professional skill option for the elvish culture) but must invest points in it. 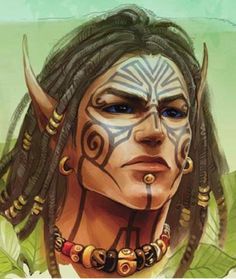 Prerequisite: any spell caster; Eradariin elves gain this feat as part of their Mark of Shaligon trait

Benefit: Called tattoo mages, the practitioners of this art stand out due to the garish spell tattoos which cover their bodies. The character may brand ritual spells upon his or her body in lieu of a spell book, gaining unique special effects for those spells.

In Chirak there are several cultures which engage in this form of ritual magic: most notable are the eradariin elves, who engage in a form of ritual scarring that imbues their flesh with spells. In the west, the Sabiri use elaborate forms of artistry and sharply contrasting pigments to imbue spell magic on their skin. Among these cultures heavily decorated skin is a sign of great power.

Rules on tattoo magic are as follows:

The Sabiri and Eradariin have learned the unique art of inscribing spells on their own bodies. Through the use of this skill, along with 100 SPs worth of tools and a special ink which comes from the blood of an enchanted creature (usually a gorgon), the Sabiri artist can spend one day placing the inscription or engram of the spell in question upon the body of the caster.

For this to work, the skill of the tattoo artist must be higher than the skill of the recipient’s spell being tattooed. The time involved will take approximately 4 hours, but the GM can rule more time for more complex spells. The spell may be of sorcery or rune magic. Once it is placed upon the sorcerer’s skin, then he can never lose or forget the spell; he knows it innately.

The Sabiri tattoo artist can also transfer the power of any rune stone* to the skin of the runecaster. This requires the same details as above, but the rune caster must integrate the stone at the time of the inscription, transferring the power of the rune to his own flesh. If all skill rolls succeed, then the process is done and the rune is now integrated physically. If the tattoo artist fails, the rune is integrated, but not on the skin (in the stone, instead). If the runecaster failed, he now has a cool tattoo that does nothing.

If the runecaster dies, it is possible to take the rune from his flesh. It is also possible to then integrate the rune through the process described above, with the integrated rune being on stripped flesh instead of a stone or other object.
Tattoo artists among the Sabiri often charge enormous sums to foreigners of the culture for the privilege of an integrated tattoo rune. The base price is usually 1,000 SPs, plus maybe some task. 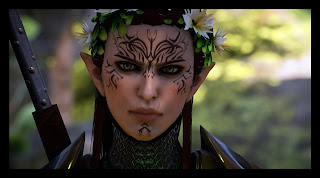 *depending on which edition of Runequest you are using....
Posted by Doctor Futurity at 3:00 PM