Somehow I missed this, which was posted back at the end of January: a total conversion of all the Monster Manual I, II and Fiend Folio beasts in AD&D for Magic World by Chris Tooley. Head here to find it. The tome is impressive, and will likely make up for the fact that Chaosium has no plans to support Magic World anymore, so we won't see an official bestiary in the future, unfortunately. You might also find it useful as a point of conversion for your preferred flavor of Classic Fantasy campaign, too.

Especially useful for me as I've spent the last two weeks working with Runequest 6 on a 3-part mini campaign (with part three up next week) and it's been interesting to contrast the feel of RQ6/Mythras with my Magic World experiences. Magic World's streamlined design definitely appeals to me more, although I know that with RQ6/Mythras it's just a matter of persistence and time to get comfortable with it.* Still....being that I am pretty quickly coming to accept that I lean towards lighter mechanics these days, the prospect of a robust bestiary to support a longer Magic World campaign is very tempting. 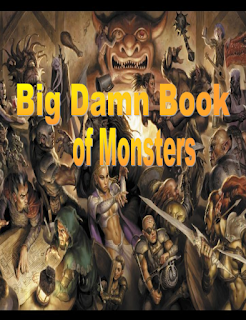 *Also, my players keep correcting me when I make rules calls that are clearly ripped from BRP/MW and not technically part of RQ6/Mythras. Sigh.....devil in the details....and apparently I have BRP/MW very well memorized, enough to trip me up a lot when trying to run RQ6/Mythras.
Posted by Doctor Futurity at 6:00 AM