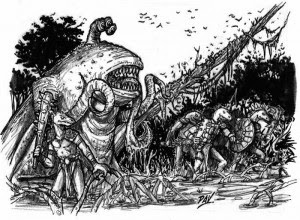 One of the few Kickstarters I backed, Designers & Dragons is already paying out with PDFs of the ongoing four book series. As I read through the 70's (which focuses on those companies in the industry which started up in the 70's) I am learning all kinds of interesting bits and bobs of RPG industry history which I had no clue on. A dozen interesting random bits that grabbed my attention:

12. When I bought Tarantis by Judge's Guild in 1983 it was probably a newly released copy....as a kid I assumed all Judge's Guild stuff dated to the 70's due to its poor production quality. Likewise, when I bought the Jungle of Lost Souls in 1984 it had only been out a year (and Jungle of Lost Souls is one of the BEST non Flying Buffalo solos ever made, btw, and was inspiration for me to write my own epic solo in the form of Aberdan's Folly).

11. There are at least three different versions of the Wilderlands of High Fantasy/City State of the Invincible Overlord setting out there, more if you count each revision as its own iteration (i.e. Mayfair and Necromancer Games). Plus, this was apparently the first coherent D&D setting published, and the second setting ever formally released outside of Empire of the Petal Throne.

10. And it still amazes me that Empire of the Petal Throne was second out the gate, given how we went from "D&D budding off of wargames" to "anthropological/cultural treatise of an elaborate alien world" in literally two steps. My original edition of EPT remains one of my greatest treasures ever.

9. I did not know that Judge's Guild's initial agreement with TSR was basically a spit and a handshake.

8. I did not know that Marc Miller and co. were working on "roleplay" sims on the computer before 1974 (in the form of political sims and such).

7. I did not know that Chaosium's very first RPG product was All the World's Monsters. I had those, but thought the series was a side project to Chaosium's cooler stuff. Nope.

6. Although I knew Lorraine Williams was the spawn of the devil for many reasons, I did not realize her family's ties to the Buck Rogers property was feeding earning from the title through TSR's publications back to them, and that was the reason all those Buck Rogers titles were pushed so hard in the early nineties no matter how much crap they were. Makes me wonder what sort of perk they got for donating so many copies to Desert Storm troops at that time.

4. I did not know Megatraveller had been outsourced for its design.

3. I also didn't know that if it wasn't for the fortuitous timing of Desert Storm and a book GDW released on the matter in 1991 they would have likely closed up shop.

2. I did not know that Monsters! Monsters! was Metagaming's first RPG product.

1. Even back in 1985 although I had heard much about how Flying Buffalo and T&T were on the rocks, no one ever explained to me (at the young and impressionable age of 14) why that was. I now know that it was over a publisher issue spurred by some hefty theft on the part of the new owner of the print shop. Yikes! It's weird to learn something in 2014 that helps bring clarity to all the second hand info I picked up as a kid in 1985-1987 without really being sure what all the fuss was about (and being too young --and polite at the time-- to ask the right questions).