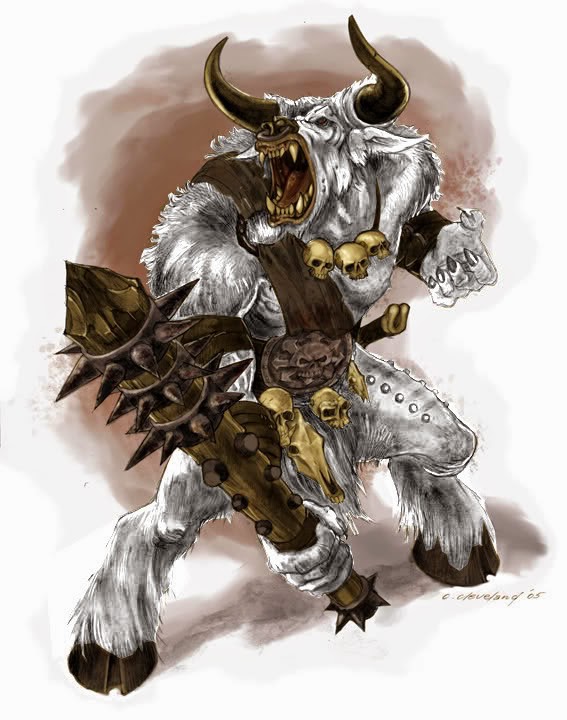 Okay, it's back to D&D this week! I'm working up different interesting items for the next few blogs  in celebration of my work schedule calming down a bit, leaving me with a moment or two to actually think of things not work related. So....first up, a race important to all four of my core campaign worlds....minotaurs!

Minotaurs in the default 5th edition are descendants of a blasphemous race of humanoids which served the demon god Baphomet and were transformed in a ritual of blood and murder. Minotaurs could have a variety of other possible origins, as well, including:

The engineered race of anthropomorphs created by an advanced ancient civilization which eventually collapsed, leaving their slave races to grow up in their absence (Chirak)

A degenerate race of beast-men spawned from a primal chaos god, who evolved over time to develop a sense of self and an understanding of their nature; now they seek out their own personal fortune or philosophical sense of being in the world to atone for their origins in chaos and sin (Lingusia)

The bastard spawn of a heinous ritual of blood and lust put forth by a barbarian cult which believes that they must honor their beast god through the magical coupling of men and bulls, which lead to these mule-like minotaur-spawn riddled with madness, seen as blessed sons of the dark god (Pergerron) 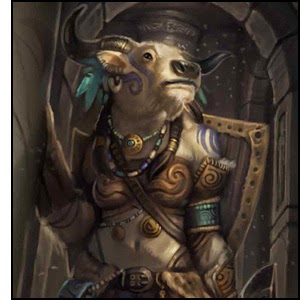 The core Monster Manual minotaur translates into a playable character rather easily, with the caveat that recklessness and charge make it a formidable fighter.

Ability Score Increase: Minotaurs start with a +2 Strength and can actually increase their Strength to 22 with ability score increases by level at the DM's discretion (for a total Strength mod of +6). Minotaurs also gain a +1 modifier to your choice of Wisdom or Constitution.
Optional Ability Score Limits: DMs can optionally limit minotaurs to a maximum of 15 Intelligence. If you choose this option, the let the minotaur have the increased Strength option as well.
Age: though it may vary by world, most minotaurs reach puberty by 10 and are fully mature by 15. Minotaurs live 40-60 years depending on how hard a life they have been subjected to.
Alignment: in a world where minotaurs are the spawn of some beast cult, demon or chaos god they will tend to be chaotic and evil. In worlds where minotaurs are a more conventional anthropomorphic race they may lean toward chaos but be equally common as good, neutral or evil beings.
Size: Minotaurs range from the high end of medium (8 feet tall) to the middle range of large (10-12 feet tall). Decide on your size at character creation based on setting; default minotaurs are large creatures.
Speed: minotaurs move quickly with a base speed of 40 feet.
Darkvision: minotaurs have darkvision 60 feet.
Charge: a minotaur can engage in a charge attack if they are able to move straight toward the target for at least 10 feet first. If the minotaur strikes with a gore attack it adds 2D8 to the damage and the target must make a save equal to DC 10+the minotaur's Strength modifier or be tossed up ten feet away and knocked prone.
Maze Sense: a minotaur has perfect recall of any maze it move through and gains advantage on any wisdom check to determine direction or recall the correct path to a place it has previously visited.
Reckless: A minotaur can choose to gain advantage on all attack rolls during its turn but all attacks against it also gain advantage as well. This last until the start of its next turn.
Gore Attack: a minotaur's natural gore attack deals 2D8+strength modifier damage on a strike. Minotaurs are always proficient in this attack.
Natural Armor: a minotaur's skin provides AC 14 protection. This does not stack with other armor, so when wearing armor of different types the minotaur uses either the AC 14 or the AC of the armor worn, whichever is greater. Dex will apply to the natural armor without limit.
Racial Affinity: Minotaurs are always proficient in the great axe.
Languages: default minotaurs speak Abyssal, but a player character minotaur starts with the common tongue and one other; those worlds where minotaurs are not spawned of Baphomet or simialr entities may speak giantish or some other language, even their own minotaur dialect, instead. 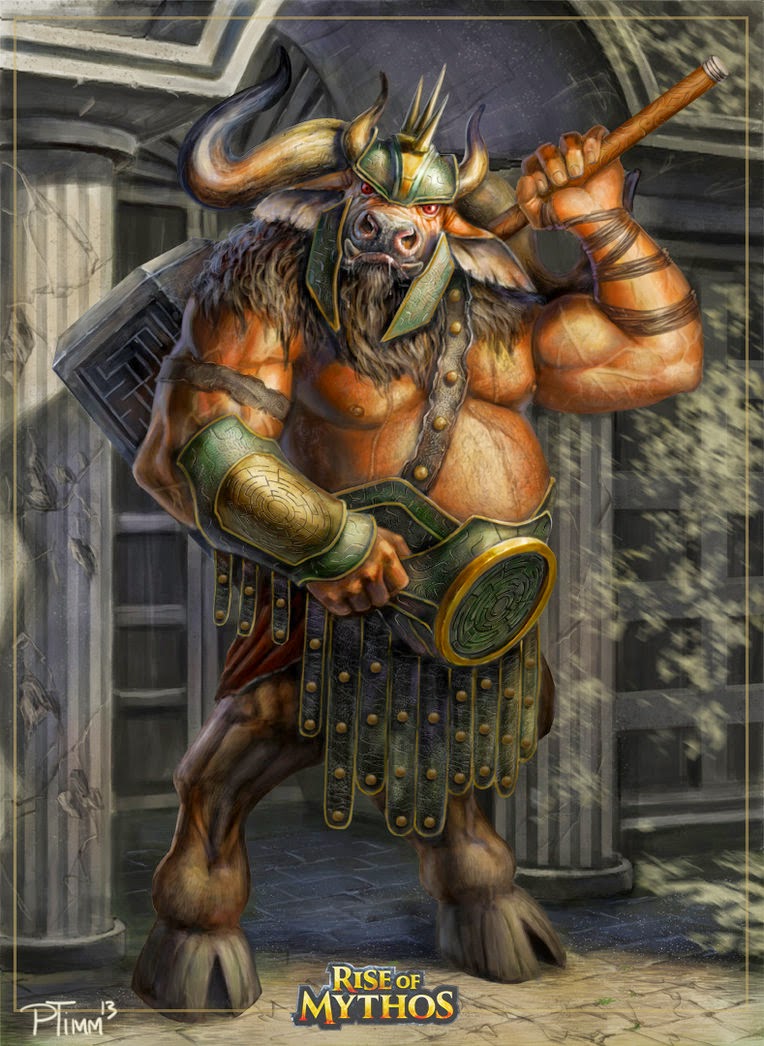 Posted by Doctor Futurity at 10:30 PM