Star Wars Non-Retcons: Problems that go away if the EU Stops Being Canon 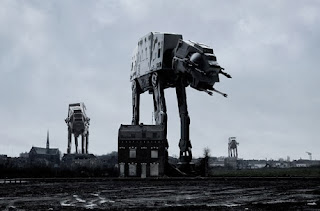 I was reading about some of the developments and rumors on the forthcoming Star Wars Episode VII recently, and last night sat down to watch a bit of Return of the Jedi with my son. He’s too young to fully be into Star Wars right now….but he does have a toy lightsaber, and I thought it would be fun to let him see where it comes from (and so now at 23 months he knows the word “lightsaber” as well).

Incidentally when you’re two, and obsessed with airplanes, cars and robots everything falls into one of those three categories; so tie fighters? Airplanes. Sand crawler? Car. R2D2 and C3P0? Robots! One out of three isn’t bad.

So while watching Return of the Jedi with my son I realized that, from all I’ve read, the next movie isn’t going to assume any of the continuity of the Expanded Universe (EU) has happened….or at least, if it does make any assumptions about the EU it may be to borrow broad concepts or specific characters (if there’s a Thrawn or Mara Jade in Episode VII it will be pure fan service, for example). Not taking the EU into account also means that certain “fridge logic retcon moments” (look up fridge logic on TV Tropes) that have become so typical for the last few decades are no longer necessarily valid.

What are these retcon moments? Glad you asked! There are a few obvious bits in the original trilogy that for whatever reason people couldn’t just take at face value….and as a result, the ever expanding content of EU material through game and fiction has made consistent fundamental assumptions about the why’s and how’s of the Star Wars universe in such a fashion that the original movies lose some of their original specialness because of the retconing nitpickery.

Examples? Why yes I do have a few! In each of the following cases I present this week we have an ordinary event, character or scene in which something innocuous in the movie that could at best be explained away as “it made for a good moment “ and on its own merits needed no real alteration, was instead the springboard for an elaborate and lingering retcon. Each of these are fairly notable, and by no means inclusive….but they do reflect ones I've always thought were handled rather….oddly….in the EU canon. Here goes: 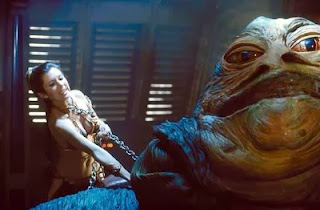 Leia Really Did Strangle Jabba With Her Own Muscle Power

I forget the exact way this one turned into a retcon, but I seem to recall it started with Timothy Zahn concluding that Jabba’s flabby neck was too thick and stubborn to be properly strangled by Leia on the Slave Barge. The solution? She was using latent force powers to enhance her strength! Problem apparently solved.

This is actually a writer’s equivalent to Occam’s Razor. Apparently it is predicated on the assumption that:
1.       Leia is not strong enough (even though she’s probably about 24 years old in the scene and in very good physical shape) to pull the chain sufficiently tight to cut off Jabba’s flow of oxygen
2.       Jabba is assumed to have some sort of physiology that is not susceptible to the sort of strangling he experiences, nor is it assumed that his health is dubious enough to make the job easier (despite the fact that Jabba seems positively sickly in his scenes)

So what happened was EU authors worked out a retcon implying that Leia used magic to do it. Mhmm.

What makes more sense? Well, let’s start with an easy premise, that what was on screen was all it took. Leia was strong enough, and Jabba unhealthy enough that the job was fairly easy. She didn’t even need to kill him….all he needed was to pass out, after all; the exploding barge took care of the rest! Thus….no need for the force to enhance Leia’s musculature despite a lack of training or understanding.

This gets rid of a big bugaboo I’ve always had with the various Star Wars retcons: that Leia was too delicate a woman to do the job of polishing off Jabba.

I'll present another one of these "non-rectons" each day this week.....