Star Wars Non-Retcons Part 2: Han Solo Really Did Refer to Parsecs as if they were a measure of time and not distance

The Scene: Han Solo brags to Luke and Ben about making the "Kessel Run in 12 Parsecs." Did not bother me as a kid, but when you get older and realize it's a measure of distance, not time then it becomes something of a head-scatcher. This, of course, was bampow sci fi dialogue from an era when technical consultants were not the norm, and audiences were not sophisticated enough to concern themselves with stuff like this.

As the years drew by however this became a bone of contention for many a fan, and the retcons have been frequent, usually centering around the official EU notion that the Kessel Run is something that happens in a black-hole rich region and doing it in the shortest distance is considered extremely impressive.

Let’s face facts, though: Han didn’t know what he was talking about, and may never have done the Kessel Run in any measure of parsecs or time worth bragging about. Occam’s razor suggests not that he was referring to some complicated distance-based space stretch but rather that he was talking out of his ass to some local yokels and impressing them with some garbage that he made up to sound cool to Luke, to put him in his place. But we know from the very same movie that Han is terrible at coming up with lies on the spur of the moment (witness the Prison Cell Block scene for proof) so it makes more sense that he was just grabbing stuff out of the air...badly.

But….Han’s an accomplished pilot and so must also be a decent navigator, right? Well sure, maybe he is; but he’s still terrible at coming up with stuff on the spot. Also, he may just leave a lot of that to Chewbacca, or even the Millenium Falcon’s computer….so navigational terms may be a thing he prefers not to pay close attention to. One does get the impression that in the Star Wars universe the ability to fly is strongly divorced from the need to understand the underlying physics of that process, so it is not unreasonable to assume that the basic principles of stellar navigation are actually unnecessary to a pilot so long as he’s got a computer or a co-pilot who does understand that stuff for him. 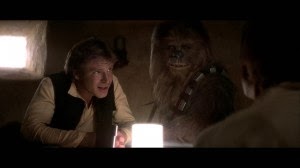