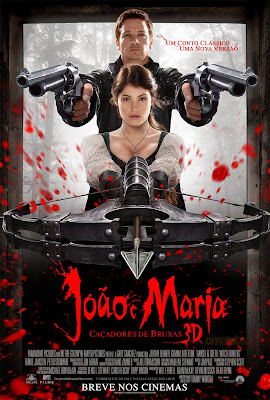 This movie came out a few months ago but my wife and I just watched it on Blu-Ray.

What the hell.....sigh. I may be too old for this sort of movie. Something inside me says, "Hey, I liked Evil Dead 2, right? I played a Demon Hunter to completion in Diablo III, right? I read action-filled comic books full of larger-than-life witches, sorcerers, demons and the heroes who hunt them, yeah? So I should like this...unholy travesty of a film...right? Right???"

Well, first some pros about the movie:

Famke Jannsen makes a great witch in this movie. She's got the look down with all the makeup and the creepy blue eyes....she does a great job. Kept me watching, sorta.

The troll was cool, a very well done creature effect.

...um...oh, and I always did want to see what a Diablo III movie might look like in live action.

Outside of that....well, I don't think this movie is bad, but it's just not what I would have wanted it to be, I guess. The anachronistic dialogue, devices and general "Kinda sorta fantasy Europe with modern anachronisms played for laughs" setting just doesn't click for me at all. The wire-fu witches and excessively badass Hansel and Gretel don't work for me here....but I suspect they may work well for someone else, maybe about two decades younger and less jaded by the MTV vibe in this movie than I am. This was an MTV Movie production, fyi....so I suppose I shouldn't be all that surprised.

I will concede that the pacing and action-magic in this movie is probably about how combat with magic in 3rd or 4th edition D&D would look if filmed. The witches' blue-paint-bolts are a pretty good estimation of what a magic missile might look like in D&D, I suppose.

I think this movie annoys me most of all because I feel like it could have been absolutely awesome if it had just tried to take itself...and its location....and its plot...a little more earnestly...or consistently; or both. Either get rid of the anachronistic elements, for example...or explicitly make it a real "Not England." Something. I can't quite put my finger on it....the movie needed to be something less....extreme, hip, and derivative all at the same time. At least for me.

My wife liked it....not "pay full price in the theater" like as she put it, but in a sort of "that was cute fun" sort of way.

I'll rate this a D- with the caveat that I am only rating it for my particular demographic (42 year old men who are recovering from the flu and a bit jaded about Extreme Derivative Anachronstic Pseudo-Historical Fantasies with Way Too Much Wire-Fu and Ridiculous Exploding Body Parts); everyone else might find this a decent C+.

No....no....I'm sticking with the D-....watching the "white witch with a holy gatling canon vs. horde of witches" scene...and...oh good grief, I can feel my intellect diminishing....this movie is what happens when you take all the "awesomesauce" crap moments people claim would be amazing on the internet and try to make a movie out of it.

Famke is still cool as the witch, though! 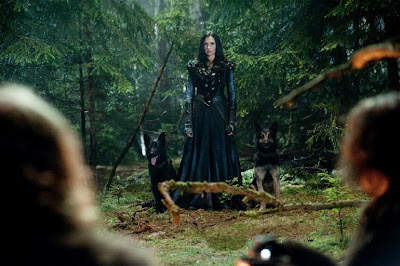 Next Day Afterthought: Hansel & Gretel are in the same basic universe and thematic genre mash as Hugh Jackman's Van Helsing from a few years back. I didn't really like that movie, either, so I guess there's just something about Over The Top Anachronistically-powered pseudo-period action films that rub me the wrong way. Just keep in mind that if you did like Van Helsing, you will probably also enjoy Hansel & Gretel: Witch Hunters.
Posted by Doctor Futurity at 6:00 AM