On the Joy of Not Caring About New Consoles

One of the nice things about having a diversity of interest is that no single thing necessarily dominates one's attention. In my case I've been far more excited about discovering 13th Age than I am about the imminent arrival of the Playstation 4 and the Xbox One. Given that I just bought a PS3 earlier this year that makes a bit of sense; I have 20+ games in my shelf backlog on that machine that I hardly have time to get to; the prospect of paying $400 right now for a PS4 just to play the new Killzone doesn't sound like a smart move...and all the other titles coming out are almost all cross-platform, including PC, which makes for very little incentive to pick up one of these consoles Day One.

Given that the 1st release of new consoles also comes with hideous uncertainties like fatal design flaws and unforeseen errors and other problems, it's sometimes a miracle that they can get such a high rate of adoption early on.  Still....a lot of people out there use the console as their primary gaming bread and butter, so I imagine there must be households out there where having one of these machines is both a necessity and a sign of prestige.

So in the midst of this consumer chaos I have opted out. I'm going to keep prepping for my 13th Age game (we're running one this Saturday!) while I enjoy my recently acquired Kindle Paperwhite (more about that later). And speaking of big spectacles, the recent World of Warcraft "Warlords of Draenor" announcement was enough to push me over the edge....after two years I have decided, shockingly, to not only resubscribe to WoW but to even get the Mists of Pandaria expansion....! So what did did I do with this return? Why, roll up a brand new level 1 human fighter, of course! I'll suffer through a pandaren later....but not a monk. I'll make something else a monk.

I don't know if it's nostalgia or just the video game equivalent of comfort food, but it is nice to return to WoW again. In the world of MMOs there's something rather pleasant and addictive about the way WoW does it's "thing" that the endless competitors keep missing. I'll play it for a while, probably lose interest eventually and then be ready for when the rather impressive sounding Warlords of Draenor finally arrives. 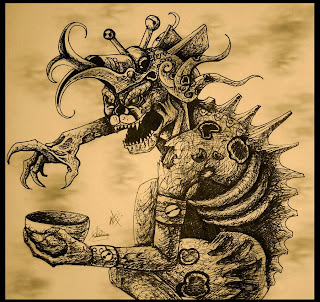