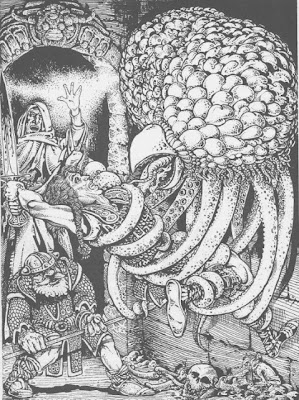 Despite a fairly robust playtest bestiary D&D 5th Edition is still missing a large number of iconic creatures from D&D (presumably they’ll be making their official appearance down the road). One of my favorite iconics, first appearing in AD&D 1st edition’s Fiend Folio, is the Grell. What follows is my adaptation of the Grell in D&D 5th edition terminology, based primarily on the 3rd edition version of the Grell introduced in the 3E Monster Manual II, to serve as a placeholder until the “real” grell makes its official appearance.

Stealthy-grell are ambush predators and gain a +5 bonus to Dexterity (stealth) checks.

Blindsight-grell do not have normal eyesight, “seeing” instead by means of scent, vibrations and air patterns around it for sixty feet. Grell do not need to make wisdom (perception) checks to detect anyone moving within this range, even if those individuals are stealthed, unless that creature is incorporeal or can otherwise move without disturbing the air or causing even the slightest vibrations.

Grell Tentacles-each grell tentacle is deadly, equipped with poisonous barbs that can paralyze prey.  A grell has ten such tentacles; striking at one tentacle and dealing 10 points of damage will severe the tentacle, but the attacker must be grappled to do this. Damage dealt toward a tentacle like this does not get applied to the grell’s total hit points. The grell can regrow a severed tentacle in 24 hours.

Immunities-grell are immune to electricity and paralysis effects.

Multiattack-the grell can make as many attacks as it has tentacles.

Paralyzation: any creature struck by a grell’s tentacle attacks must make a Constitution save vs. Paralyzation DC 12 or become paralyzed for 4 rounds.

Grapple Attack: a grell which attacks and hits a creature one size smaller (or more) than it is immediately subject to a free grapple attack from the grell. Each round the grell retains the grapple the creature automatically takes tentacle damage and must save vs. paralysis. 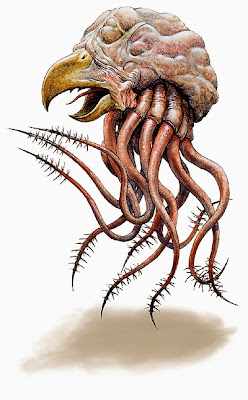 Posted by Doctor Futurity at 11:33 PM