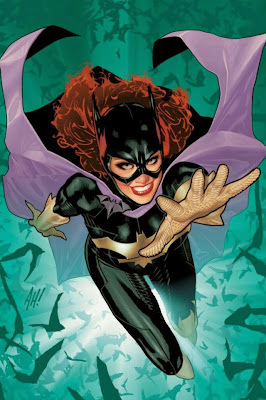 When it comes to the comic reviews (as I get around to them) you may notice a trend: I have a fondness for the old Wildstorm characters, and the broader Batman Mini-Universe that DC likes to keep expanding on. It's getting hefty with costumed vigilantes, from old staples like Batman himself and Nightwing to the new younger Robin, Red Hood, Batwoman and...after roughly 24 years' absence (or presence, as Oracle) the return of Batgirl.

Barbara Gordon's stint as Batgirl ended in 1988 with the landmark The Killing Joke, DC's first effort at wedding the vile Joker seen from the Dark Knight Returns with the then-current era Batman comics, making Joker something more menacing and psychopathic than he had really been portrayed as, previously. Not that Joker wasn't psychotic, evil and demented already, mind you; but The Killing Joke was his first real damaging tale of villainy against the Bat-family, in which Barbara Gordon, alias Batgirl and daughter of Comissioner Jim Gordon, is shot by the Joker in a calculated act of violence. If I recall the Joker did it primarily to get at Gordon and his family, and was unaware of Barbara's role as Batgirl.

Barbara Gordon recovered, but was paralyzed from the waist down for the next twenty four odd years,* taking on the role of the shadowy Oracle, a behind-the-scenes information broker for the vigilantes of Gotham and sometimes beyond. It was a remarkable move on DC's part, because it kept her character interesting without ever retconning or negating The Killing Joke. Until now, that is...

There are two reasons to forgive the DC writers for fixing Barbara Gordon and letting her walk again. First: Barbara was the first but far from the last DC hero to get a broken back, she's just been unforunate enough not to get a lengthy plot arc for redemption and recovery (i.e. Batman). Second, her return in the hands of writer Gail Simone is extremely well done, and worth every moment; it's really nice to see the fragile but determined Batgirl return to action once more.

The Darkest Reflection is Volume I in the collected TPBs of the New 52 series featuring issues 1 to 6 of the new comic. It takes off right from the thick of it, with Batgirl's recovery something that happened previously (it may have been documented in another collection, not really sure). Batgirl starts off dealing with the Mirror, a fellow determined to kill those who have been fortunate enough to survive unpleasant fates under miraculous circumstances....including Barbara Gordon. Following the Mirror we have Gretel, a once good wannabe reporter turned victim, psychotic and psychic mind controller. Amidst this we get to see Batgirl reconnect with Nightwing (hint: it's awkward) and Batman himself (hint: it's rather touching). She deals with a new roommate as she moves out of her father's house (hard to sneak around as Batgirl when you're living with the Police Comissioner) and takes up room and board with a seemingly ordinary anarchist/professional cook, who also is happy to be her confidant...if Barbara wasn't consumed with the heroic secrecy bug, of course!

With great art, excellent writing and Simone's keen sense of meaningful dialogue it's a lot of fun to see Batgirl back in action. If you're addicted to Gotham vigilante stories Batgirl is well worth a look-see. 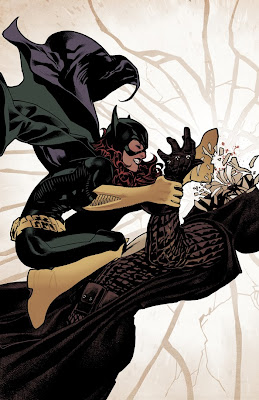 *Fun fact: the first chapter in TGN establishes that The Killing Joke took place 3 years prior to issue 1 in the new 52 timeline, which means all of Oracle's activities over 24 years (minus retcons and "never happened" plots) were crammed into roughly 36 months....or about 1 year every 1.5 months.
Posted by Doctor Futurity at 6:01 AM