It's back! After a bit of an absence I feel the urge to write some more about Basic/Expert D&D. I have acquired PDFs of the remaining Basic series modules, as well as the Creature Catalog and the D&D Rules Cyclopedia. Many of the modules I have never owned before, but I once held the D&D Rules Cyclopedia and CC in my collection....ah, if only the years hadn't been so unkind to my library over time!

For this installment I present a racial class for minotaurs. The D&D minotaur is a ferocious, not often smart brute that eats humans and is very determined. The mintoaur presented in the D&D Rules Cyclopedia is a creature with a 5 intelligence and a minimum of 16 strength to reflect its damage bonus with weapons. The typical minotaur stands around 8 feet in height and can fight with weapons, gore and bite. Finally they save as level 6 fighters.

To make minotaurs into a playable race we'll assume that the bit about "minotaurs of greater intelligence" is actually typical of PC minotaurs; your average NPC minotaur may be a brute, but its the smart ones that tend to be more agreeable with other humanoids, or to seek out a better station for themselves in life apart from running down and eating men in dark catacombs. We will also assume that the average minotaur presented in the core rules is actually a level 6 minotaur; a PC class minotaur actually begins at first level with 1 hit die like any other adventurer.

Prerequisites: When rolling stats, minotaurs must have a minimum of 9 strength and constitution with no upper limit. Their intelligence score will fall between 3 and 16, as will their charisma. Minotaurs have no limits on other stats.

Class Advancement: minotaurs roll D8 for hit dice at each level, through level 10. After level 10 they gain 3 hit points per level thereafter. Minotaurs can advance to level 15 before they are maxed out (at the DM's discretion). They advance as fighters for purposes of experience points per level. Likewise, minotaurs gain saving throws as a fighter, but roll on the monster attack matrix, and use their active hit dice to determine THAC0 hit numbers; if the minotaur gains a CON modifier bonus to hit dice that is factored in (so a level 3 minotaur with a +1 CON modifier per level is treated as "3+ to 4" on the chart).

Weapon Skills and Armor: Minotaurs are familiar with all weapons, but tend to favor spears, clubs and axes. They are also familiar with all armor, but a minotaur has to pay four times the cost for a suit of armor that is properly sized for his unique shape and height.

Natural Attacks: any minotaur can attempt a gore and bite attack in a round, each of which deals 1D6 damage.

Natural Armor: minotaurs have tough skin, and a natural AC of 6. Minotaurs will always default to the better AC of either worn armor or natural armor, but they do not stack for effect.

Combat Maneuvers: if using these rules, minotaurs gain access to combat maneuvers at level 15, but in the same manners as dwarves do at level 12, including two attacks per round, and advance in the same fashion as dwarves from this point. 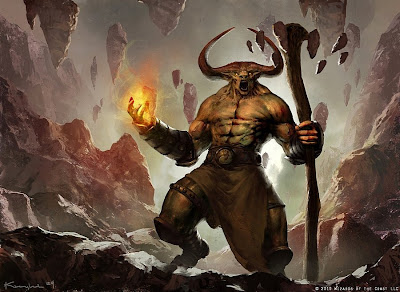 Spellcasters: a minotaur which meets the prerequisites for clerics (shamans) or magic users (wokani) may advance as spellcasters in addition to their regular advancement. To advance as a shaman, the minotaur advances as described above, but also must pay the full XP cost for advancement through level 4 as a cleric at the same time, and gains none of the cleric benefits except for spell casting. After level 4 the minotaur shaman can continue to advance as a minotaur, but no longer pays the supplemental cost for the four levels of cleric; at the DM's option a high-wisdom minotaur could continue to pay XP for cleric levels up to a level equal to wisdom minus 10 (so max level 8). Likewise, a minotaur wizard, or wokani, is limited to level 2 in the same manner, gains only the spell advancement, and may continue to advance as a regular minotaur after maxing out; a higher intelligence may optionally allow for higher advancement in the same manner, to a maximum of level 6.

Note that the XP cost for advancement in these classes is tallied separately from the minotaur class XP accrual; all XP earned while advancing in both classes is split evenly.

Shamans and Wokani have limited spell lists; the lists are on page 216 of the D&D Rules Cyclopedia; if you're using an older set like B/X, just use the cleric and magic user lists, instead.

Other Notes: minotaurs are not often accepted in society, though some cultures may be more or less used to them depending on circumstances; some regions may know little of the bloodthirsty subterranean minotaurs and find a bull-headed man to be a novelty, others may fear them due to frequent raids, or know them only as gladiator slaves in the arenas. DMs should weigh carefully reactions to minotaurs in humanocentric regions, or areas devastated by monster attacks. 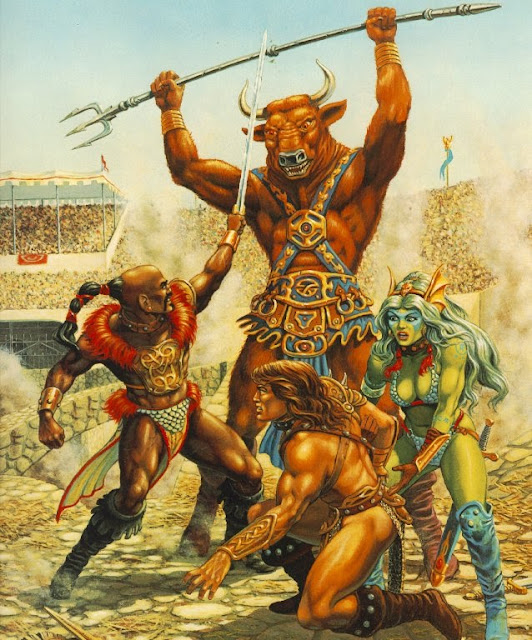