Player's Knowledge of the Relic Kingdoms 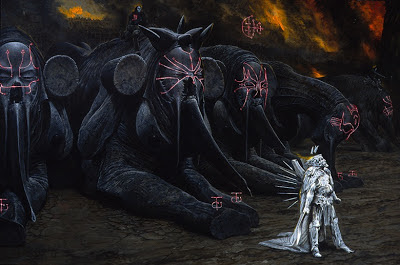 Player’s Overview of the Region
Eredoth is a northern empire, embedded in a thousand miles of rocky coast. They are a relic empire, descendants of expatriates from long ago who colonized the region and fought back against the barbarianst of the Frostmounts. The people of Eredoth are divided, in that there is no stable king. In southern Eredoth two major powers vie for control: the kings of Ghaellan and Saagarest. Saagarest is centered on an island in the Grey Sea roughly the size of England, along the coast dominated by the duchies of Ghaellan. You are all starting in the city of Ghaellan, where self-appointed king Emerad rules. Finally, Eredoth's religion is based on the worship of something called the Vestiges and the Spirits.  The Spirits are saint-like figures that are believed to be granted godlike power by the enigmatic Divine Wind, a manifestation of the lost Ancient Divinities of old that was said to have been worshipped by the ancient colonists of Eredoth, and the reason for which they were exiled and forced to colonize this distant land. The Vestiges are described as the ancient Spirits of the Earth, immortals which perished eons ago and of which only the power of the Divine Wind still exists. Vestiges might be seen as undead gods. Eredoth also has a beliefer (fear) of demons, calling them the fiends of Yagoth.

Nidragom is located to the south of Eredoth, and it is best described as a land of madmen and wild barbarians. They are fiercely warlike, tribal, and disorganized, but by virtue of their own ferocity and dedication to something they call the Mania (which is worshipped both as a philosphy and a god) they are a formidable force of berserkers and killers. When Eredoth's polities are not warring amongst themselves, they recruit from Nindragom for mercenaries.

Easter of both lands is the Xiang-Kotonos, an eastern empire of warriors and godless men who revere the blade before all. The Xiang-Kotonos are made less threatening only by virtue of the thousand miles of desert tundra between their kingdoms and the region of Nindragom and Eredoth, but an occasional warlord will brave the barren lands to seek out battle with the western powers.

South in the deep high mountains of the east is Laiwan, a remote kingdom of mountain dwellers who are the gateway of trade between the westerlands and the distant east. They are small in number but safe by virtue of their isolated mountainous homeland. They are mysterious and mystical people, said to worship the Sun itself, although they have a complicated pantheon of Demon Gods that they feel dictate the trials and tribulations of their daily lives.

Across the Grey Sea from Eredoth is the largest mountain range in the known world, the immense Anantes mountains, The people of this region are called the Capac, and are divided into two cultural groups: the lowland Capaci of Narasco, who subsist on trade and the sea to survive in the harsh, dry deserts along the slopes of the great mountains that touch the Grey Sea, and in the immense highland regions of the Anantes Mountains is the mysterious and very ancient culture of the Astananku, said to be ancient magicians and nearly immortal descendants of a lost race of old. No one knows much of who the Astananku worship, although the lowland Capaci strongly favor the water goddess whom they call Mataki, and her counterpart, the storm god Hukil.

Finally, there are known to be other, more distant lands which the Eredothian sailors sometimes trade, far beyond the dominion of the Grey Sea. Westward beyond the Anantes Mountains the Capaci people speak of a terrible empire of evil, dominated by demon worship and sacrifice. South of Nindragom is a vast, trackless desert waste from which occasional merchant caravans emerge, claiming to come from the distant kingdom of Dragos across the desert.

Elves in the region of Eredoth are known as the Asharion tribes of the frostmounts, a cunning and secretive race that lives in nomadic tribal groups. They are often at odds with their dark elf counterparts beneath the frozen glaciers and deep in the mountain caves of the region, who are called the Kaddan. The Kaddan worship the vestige Zaramast; in the elvish mythology, it is said that the Kaddan were normal elves who stumbled upon the burial ground of the ancient vestige thousands of years ago, and his dark tendrils corrupted their flesh and spirit, turning them into what they are today.

There are haflings all along the coast of the Grey Sea, and there are several enclaves of stout dwarves in the Frostmounts and Anantes mountains. As with all other lands, gnomes and goblins exist, though the goblins are seen as pests of the Arescu Forest and the lowland, warmer Iargan forests of the south, while the gnomes gravitate toward cities and towns of other races.

Dragonborn are extremely rare, but tieflings are extremely common, especially among the Nindragom, who prize the blood-induced madness of some tiefling warriors, and often rely upon rituals of the mysterious Demon Gods to call upon the Mania and allow them a bonding with infernal beings to create such offspring.
Minotaurs are known in this land, but they are found chiefly in wandering tribes in the southern deserts and eastern tundra. Orcs are present, as ever, existing primarily in a vast network of caverns Gazad Mountains of Eredoth, though many orcish tribes can be found in the Frostmounts and Anantes mountains as well. 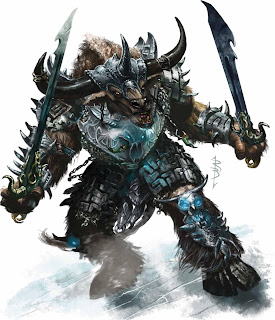