The Steam Sale ends today, and with it I came away with a few gems worth mentioning...

The Incredible Adventures of Van Helsing

Just as I was getting ready to fire up Diablo III again to see if the itch I had for an isometric ARPG could be scratched by repeating the D3 content one more time, The Incredible Adventures of Van Helsing comes along and says, "We know what you like best about Torchlight II and Diablo III, and we have merged it all into an unholy concoction of villainous joy, right here! Also, offline and co-op play.Seriously, check us out." It was a chatty game.

Either way, it's also a very good game, and it really does fill a much-needed post-D3, post-Torchlight era niche that has been largely vacant since those two games came out and demonstrated that the era of the ARPG is far from over.

Van Helsing is very polished, at least as I've seen so far. It's graphics are crisp. The voice-overs are well-done, the plot is well-presented and sometimes takes a moment to slyly wink at the fourth wall of computer games, and it is just generally feels good, something that a surprising number of ARPGs fail miserably at.

Bottom line....if you've been jonesing for an ARPG experience that riffs off of what the Big Two have done, and manages to blaze its own trail in the process, then you should check it out. 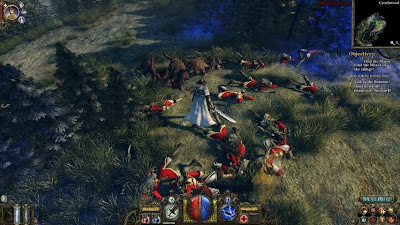 In fair disclosure I owned the core Sleeping Dogs title prior to the Steam Sale, albeit purchased from an older Steam Sale. What I hadn't done until now was play much more than the main intro/prologue sequence and then set this one aside for other more pressing games. When I recently realized that I really enjoyed Saints Row 3 for its bizarreness, I also recognized that the vast open-world (open city?) zones of SR3 were actually a big component of the draw. It was then that I remembered I had a few other games that did the same thing, and after downloading those games I realized most of them were either too old and crusty or too obnoxious (never liked the GTA style) to enjoy....but Sleeping Dogs was an exception.

I took advantage of the Steam Summer Sale to snag all the DLC for Sleeping Dogs, which includes a range of additional suits, scenarios and content for this bizarre and fun romp through a Chinese Metropolis, a setting which has been loving crafted in great detail....the city of Sleeping Dogs is so well done, in fact, that I've enjoyed just wandering around to see the sights and explore. It's really very impressive. The fact that it has a compelling and very well acted principle storyline, mixed with a metric ton of amusing side quests is just icing on the cake. The main character is an undercover cop, which means you can play the game with the safe sense that you can become a vile bastard if you wish, but you're not starting off as one.

If you like the concept of an open-world exploration/sand box GTA title, but wanted it to have a more exotic location than Liberty City and a more empathetic character than some cheap con, Sleeping Dogs is for you. It even has some trippy alternative costumes, nods to Hong Kong cinema and wushia action, and an occasional wacko scenario that almost makes Sleeping Dogs as bizarre as SR3 at times. Almost. 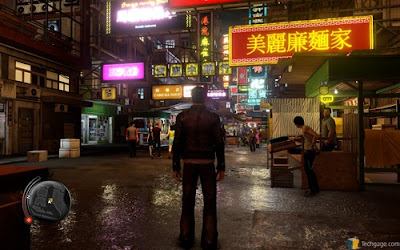 I began to suspect that Borderlands 2 had something more to offer than its predecessor when my wife, a largely MMO-only enthusiast, kept playing it. She's been playing B2 on and off now since it came out last year, actually. Obessively, even. And even more amazingly, her other MMO cohorts all join her regularly for their crazy romps through the landscapes of Pandora. My wife bought B2 for me last week during the sale, and I subsequently snagged all the DLC (the only time it makes sense to buy DLC: Steam Sales).

I have played a few hours now, and can state the following: if you, like me, had various issues with the original Borderlands, those issues are all resolved in B2. My issues with the prior game included: great lead in, followed by unfulfilled promises of and sort of meaningful or engaging story and characters and a general annoyance at the vast array of completely random guns. I had other issues, but those two were what made it less satisfying to finish the game for me. B2 immediately demonstrates more attention and effort to story, doing a great job of punching it up, a lot. Likewise, it's got a reinvented inventory system that at least makes figuring out what gun is worth your time a bit easier. Will it sustain through other gripes I had? Time will tell, but those two fixes right there are making B2 an immensely more entertaining experience already.

Also, if you (like me) couldn't muster the energy to finish the original, be assured that while this is a direct sequel, it focuses on new characters and so far I have found nothing which suggested I should have survived through the end of the first game to understand the second at all. In fact based on what I've read, the original Borderlands had a pretty basic and uninteresting ending (spoilerish alert: they find the vault, open it, and a tentacle monster comes out, the end). B2 starts some time after that, but then adds lots of new reveals that would never have been seen in the threadbare storyline of the original. 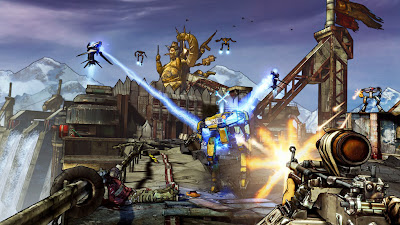