Monday Update! Sick Family, More of the Saints, and Lots of Rain

This is another Update blog, which is to say I've missed a couple and have no content lined up as yet. Last week was a hectic work week as co-workers were out on vacation and I was pulling double duty in other departments I don't normally dabble in if I can help it (even if I am the boss; knowing when you don't know something is an important part of the job). Then as work returned to normal I and my entire family came down with some hideous virus simultaneously, with myself, my wife and my son all equally sick. Plus, on top of everything it's been pouring cats and dogs in New Mexico, which is amazing (and needd). What a weekend! Lacking much energy or time I did not get much blogging done. 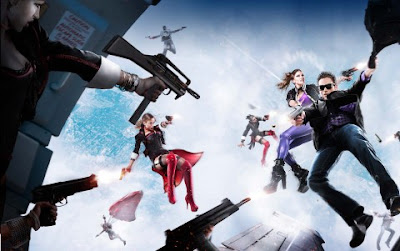 I did, however, play a lot of Saints Row the Third, and actually finished all the story arcs and primary campaigns. I got to about 78% completion, with only a smattering of the miscellaneous missions and challenges incomplete. All in all I got about 45 hours out of the game, which was not bad. The storyline remained as crazy as one could expect right to the end, albeit with the caveat that SR4 due out next month will top even the craziest storyline in SR3 right from the opening, a tradition now for this franchise, it seems.

After finishing SR3 I started a new campaign on hardcore mode with a male character using the gravelly Statham voice option (as my wife puts it) to see if playing a second gender made a replay worth trying. Aside from the entertainment value of seeing and hearing a dude go through everything it appears to be an identical experience, but the visceral enjoyment of replaying the game is pretty strong, stronger than many other recent titles I completed (i.e. Diablo III, Max Payne 3 and Star Trek, to name the last games I completed). There's also an advantage to replaying SR3 in hardcore mode, too: it's a tougher challenge, but I know that the accrual of reputation (leveling) and accompanying perks will lead to game-changing superiority over time, and this might make for a more challenging experience with a greater sense of reward when those really amazing perks start being acquired.

A week or two ago I pitched an idea about using SR3 as inspiration for a supervillain campaign, maybe powered by Mutants & Masterminds. As it turns out, one of the final missions for SR3 actually ends up giving you a range of superpowers, with which you proceed to trash Steelport. It was a great deal of fun, and a hint of things to come in SR4 if some of the trailers are anything to go by. Apparently Volition toyed with the idea in this once DLC pack (the one with Clone Gat) and realized that there was a great deal of additional potential by elaborating on it. I'll be curious to see if SR4 makes it a more integral portion of the game, or restrains it to a specific set of missions. In SR3 it's a temporary effect that lasts for an hour or less (more use burns it out). They could do something similar in SR4, but make it possible to purchase or find more doses, I imagine. One of the trailers shows Gat running up a building, though...Prototype style....so maybe they'll expand on the power options, too. 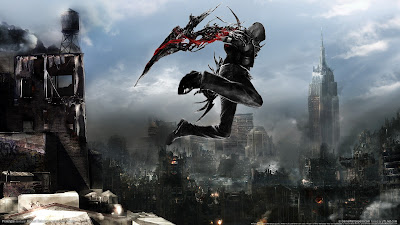 Speaking of Prototype, I snagged that plus Prototype 2 on the Steam Sale and got a few hours in. It inspired me to also resume playing more of InFamous, to contrast the two. Both are very decent games, worth playing, and I'll talk more about them in weeks to come, thanks to my newfound fascination for the wacky world of Open-City Sandbox/Theme Park GTA-clone titles. Prototype is especially interesting because it is best summed up as, "You start the game playing as the end boss from a Resident Evil title." InFamous has an interest good/evil moral quandry mechanic, which means you can be a suitably villainous menace or a misunderstood hero, depending on how you play your cards. Many of the quandries are sufficiently nuanced that it is actually easy to see why choosing the villain path might be smarter, if not kinder, which is interesting. 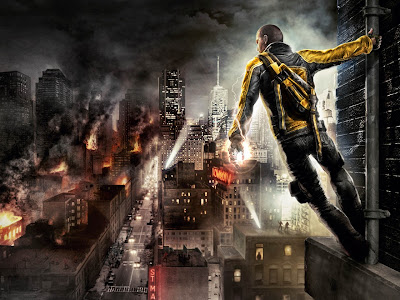 You know what the biggest threat to the next generation of consoles is right now? It's the last generation of consoles.....at least it will be, for the first couple of years. There were so many amazing and well done titles released over the last seven years that it's impossible to to have kept up for most people, and for gamers who aren't obsessed with the new and shiny (and I would postulate that most of the aging gamer base eventually become more concerned with games they can enjoy on a decent time:money ratio, as opposed to whatever is brand new) being able to pick from such an amazing selection of discounted titles is a real boon.

This is why the Xbox One and PS4 aren't offering backwards compatibility....they know their greatest enemy out the gates is everything that has come before.

I'll try to have more content out this week....been blogging about video games a lot lately, but I concede that my focus lately has been on gaming and also catching up on reading (especially some Wade Davis books I have been enjoying). I really should do some more book reviews soon, and maybe put more of an effort into blogging about all the interesting stuff going on in archaeology and anthropology in general. There are some blogs out there which I admire for their quality over quantity approach; maybe I'll try focusing on fewer but more substantive blog entries....we shall see!