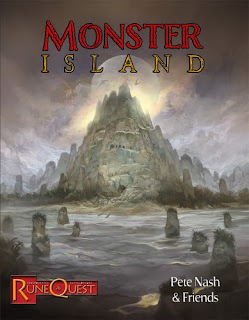 It's out on RPGnow, as The Design Mechanism is always timing their releases for when I've just had a huge number of expenses and can't afford to buy something at that moment (very long and depressing story). Looks like it's available in print on TDM's site as well (here), and there is also a "Companion" set in PDF at both locations, too. I still don't see the sourcebooks showing up on Moon Design, though.

I snagged the Book of Quests on Ebay through one of the reliable regular vendors over there (Troll and Toad) as my FLGS has had a hard time getting this stuff in. I'll have to keep an eye out for it there, or maybe I can order it through TDM in a week or two.

Anyway.... I need to get a campaign going with the new RQ6 rules, I am way past due for starting one up. Maybe I can squeeze it in on a bi-weekly Saturday evening. FYI Book of Quests is so good that I might break my long-standinjg habit of not using modules to actually run the scenarios in that one. Pete, Loz and co. are doing some out-of-the-park amazing stuff over there.I should post a formal review, come to think of it. Maybe in a week or so.