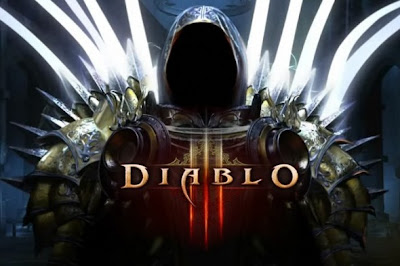 This is a very late post mortem because, of course, Diablo III has been out for more than a year. I share these thoughts because...why the hell not, it's my blog! Plus I know that there are many other fathers, mothers, wives and husbands out there who, like me, are just happy to play a game, let alone find time to play one through to the end, and hearing about last year's left-overs might help one to make a decision about whether the time invested is worth it.

I played a variety of characters up at least a few levels, and took one dour male witch hunter all the way to level 31, with the murderation of Diablo himself at the end. I logged a grand total of 34 hours in Diablo III according to Raptr, and I think about 28 of that was in the main campaign.  According to How Long to Beat, had I been a younger man with spazzier reflexes I would have knocked it out in about 19 hours. That fact that a sought out every text and bit of data I could locate in the game on the story (and paused to read/listen to them) probably contributed to this time increase.

In the course of playing through the campaign I learned a few important details:

The Diablo Difficulty Curve is more of a Gentle Slope: The game was clearly designed to be relatively easy...as in, click this repeatedly easy....for most of the way. If you find yourself in a pickle, it's because you haven't thought about your skill choices lately, or you're getting tired....or you're lagging. The game's difficulty really doesn't even begin to ramp up until late in the third act, and even then it's still fairly trivial to plow through most encounters. In the fourth act you finally get monsters and bosses that do interesting things that require you to pay more attention....but it would have been much nicer to have more features like that early on; I'm just not that thrilled at the button masher genre anymore (okay, I never was; this is the first button-masher ARPG I have ever finished, let alone gotten halfway through!)

The Nightmare and Inferno Modes at Locked to Character and Come Later for a Reason: Or put another way, Nightmare mode is really just Blizzard's way of saying "difficulty aimed at level 30+ characters" and Inferno mode is even tougher. Hell mode or whatever comes last is for level 60, I think. I cleared one campaign on Normal mode, discovered that unlocking Nightmare meant only for a second playthrough on the same character, and decided I was done with the game. The interest I had in playing through a new class on normal, or seeing what new stuff my witch hunter could get on a second playthrough of the storyline, with not even a smidgeon of effort to explain why he'd be doing it all over again; typical "lack of RPG logic" style of computer games, where RPG has nothing to do with story and all about stat leveling. I could neither tolerate a repeat of the same content purely on the off-chance that they might make those first three acts slightly more interesting, nor did I care enough to kill things with fists, magic missiles or axes with another class just for the slightly different novelty.

It's Still Better than Torchlight II: but that doesn't mean Torchlight II isn't good, it just means that, for a single play-through, Diablo III was more rewarding in terms of story content and graphic design. For me, of course. YMMV.

The Always-On Connection Problem: this was only a problem for me once when playing the game, a few months back when I couldn't get online to play due to Blizzard authentication servers being down (or something). However, a bigger issue which I could only attribute to lag was the tendency for the game, after starting up, to have a lot of herky-jerky actions for monsters and laggy response for characters in the first encounter or two. On rare occasion or when playing on my laptop wirelessly I could get some serious lag that made the game effectively unplayable. This was, as so many have said before, total nonsense. I tried hardcore mode, and this opening lag got my hardcore barbarian killed. I realized then it wasn't worth it.

The Auction House: this became the only real way to make money and get gear. However, it was also probably the most damaging to the game's internal consistency as a whole, as it was definitely packaged as an outside fourth-wall event breaking in to the game's world-space. You had to leave the game to engage the auction house, and in doing so you guaranteed that loot would drop like magic into your character's lap, usually far better than most of what was actually found on play-through. Selling "grey items" was only for vendors; anything else would be guaranteed to net you more cash on the auction house. I have no idea who would spend real money there, or why; I never once needed to do so, nor could I find a compelling reason to do so, not even the matter of prestige. I think that's something only the hardcore hell mode crowd can answer.

The Chat Screen: it was like having the Barrens Chat in a single player game! Yay! Seriously, 90% of the time it was dead, but when it wasn't you were occasionally forced to ignore the random yappings of infantile players. Business as usual for online gaming, I guess.

And so, after trying a monk for a few levels, trying nightmare mode for a short period and finding it no different than normal mode (relatively speaking) I realized I had gotten exactly all that I wanted out of Diablo III and sliced it free of my hard drive. It was a fun story with an interesting twist....but like An M. Night Shyamalan film, I'm pretty sure it wouldn't have the same impact the second time around. I shall reload it in the distant future when Actiblizzard finally, theoretically, releases an expansion for it. 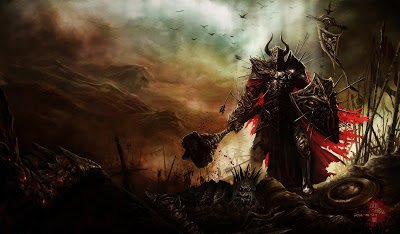