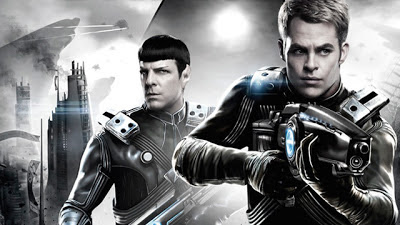 Hey look, I played another movie tie-in game all the way through to the end. Unlike Aliens: Colonial Marines, the general dislike for move tie-in games hit Star Trek with a soft glove, rather than a heavy mallet, but Star Trek took some hits, just as they all do. Unlike A:CM there may not be as much deserved hatred here, although Star Trek is far from perfect.

Star Trek TVG is effectively an episode of the adventures of the new Abramsverse Star Trek that slots in between the two films. It's also the unholy love child of Uncharted: Drake's Fortune, Mass Effect and Gears of War; if you've played any of the above titles, then you will find Star Trek to be extremely familiar territory.

One thing this game isn't is a triple-A budget title. When I got to the finish I was pleasantly surprised to see a credits roster that lasted maybe two minutes at the most, and was considerably shorter than the credits roll in most games I've played in the last three or four years. This explains, among other things, why the game has a lot of odd little glitches on occasion, but it's also commendable that they got a game like this to work so well without having a thousand people on staff. To contrast, sit through the credits on Max Payne 3-it felt like I was scrolling through the phone book of a modest city!

So who is Star Trek TVG for? It's at least partially for fans of the movies, of course; the J.J. Abrams Star Trek universe if actually rather well-suited to video game logic and plotting. It's definitely not for fans of the older Treks, as like the current movies this one takes very little time to slow down and think about what is actually going on. In many ways the Abrams take on Trek is about misrepresenting the extent to which Star Trek is or was an inheritor of classic pulpy space opera; it's about grabbing that "western in space" feel that Roddenberry mentioned and ignoring all the other stuff Trek was about. But hey....if you're enjoying it (and I do enjoy it, with the caveat that it feels more like parody and fanfic than a real inheritor of the Trek legacy) then this game could be fun to play.

The game has several strong points: it's got the crew from the movie doing all the voice acting, and it really lends to the quality of the game. If they had used substitute actors or relied on read-only dialogue the game would have suffered for it. The game also plays very well, and occasional glitches aside it's a competent chest-high-wall shooter ala Gears of War, with a huge dollop of Mass Effect-style run and gun mixed in, occasionally broken up by Uncharted-style wall climbing and platform jumping. Kirk and Spock occasionally like to jump out of airlocks with some handheld rocket packs for some Dead Space-styled flying sequences, too. At no point does any of this feel uncomfortable, although as I said earlier, older Trekkies might start to wonder at what a dangerous universe this iteration of Trek portrays.

The game's plot focuses on the founding of New Vulcan, as a planet is chosen for possible terraforming using an enigmatic plot device (the sole purpose of which appears to be to open wormholes in space and blow up) which becomes the target of the gorn, who pop through one such wormhole and decide to wreak havoc. Despite not having been encountered by humans or vulcans before (to go by what the game stated) gorn are nonetheless well versed in alien physiology and have these robots which inject people with a zombie-mutagen, turning Starfleet personel and vulcans alike into rage monsters who are out of control. The game gets momentarily ethical with it's secondary goals, which include disabling and knocking out victims of this injection rather than phasering them into oblivion.

Once the gorn invade, the Enterprise arrives in time to beam down it's Captain and Commander into the thick of the party, after which Spock and Kirk single-handedly carve their way through a mound of zombified personnel and an endless array of gorn, in locales which include New Vulcan, the Enterprise, the gorn warship, the gorn homeworld, a starfleet space station and occasionally the depths of very debris-cluttered space. In the end, you will have single-handedly neutered the gorn navy, although it does feel like a majority of the remaining vulcans and Enterprise officers in this universe have now been subjected to zombification (don't worry, they get better) in the process.


Aside from the rollercoaster plot which propels itself along at a breakneck pace, the game pulls out plenty of movie-quality stunts and makes a complete mess of the previously messy but now totally FUBARed physics and internal consistency of the Star Trek lore. Star Trek has always been about inventing lots of imaginary particles, subspaces, and other nonsense in the past to help justify its stories, but previous efforts usually (with mixed success) tried to maintain some level of internal consistency, if only for the sake of the fans who take this stuff very seriously. The new Trek does this, but tends to do so with a complete disregard (some might say "lack of respect") for what has been previously established. The game is pretty much no exception, and in all honesty, much like the movies, you have to accept that things work the way they do in this version of Trek because it's Unified Theory is "Rule of Cool" and not anything remotely related to real physics, logic, or even prior Trek canon.

Why, for example, do Kirk and Spock regularly jump out of fast moving objects to sprint with handheld jet packs to another distant ship or location, despite the fact that no one mentioned whether or not the transporter is working, or even that they could transport them to within meters of their goal, at which they could use the handheld jet packs to travel safely a few more meters for entry? Rule of Cool.....it's not as fun as jumping out of one space ship to fly through a debris field to another ship.

The gorn get a major face lift here, the first one as best I can tell (unless they showed up somewhere else that I am unaware of). They are now apparently multiple species....or one species with multiple different subtypes (no one comments on or notices this in the game, best as I could find). The gorn are basically what happens to a rubber-suit lizard monster who's job is to fight Captain Kirk in the California desert for a 45 minute TV show when the core nugget of lore is extrapolated forward into a post-Halo, post-Covenant, Post-Gears of War Locust universe in a video game world where enemies must fit different types. But hey, good news....it was an excuse for the developers of the game to get the requisite odd variety of exotic weapons into the mix, all freshly reskinned from Mass Effect 3 and Halo.

Star Trek TVG is actually set up so you can play it as a two person co-op adventure, with one person as Kirk and the other as Spock. I played it single player, and admit that it would have been more fun with a second live person, if only because Spock's pathing as an AI was awful, and on occasion I would have to restart due to the AI taking him somewhere to die quietly. Once, and only once, I got to watch him sink through the floor and disappear, then die later. Sigh.

There is also a multiplayer option, of which I can say little because each time I tried to get into a game I could find no other players (go figure).

So, having finished the game, was it worth it? Yes, if you fit the following profile, as I did:

1. First, find the game on a very nice discount. If you may more than $20 for it you may feel buyer's remorse.

2. Second, you liked the movies even though the Rule of Cool physics and inherent plot monstrosities they actually are still vexes you. Double plus if the movies didn't bother you like this at all, or you can't see what the big fuss is all about.

3. You like adventure games of this sort, and want to support the industry by showing them that an audience does exist for games which involve guys in space suits running around and doing stuff, and not always just shooting things. Actually this game is a relatively poor example of "games that require more than just shooting" but in it's defense most sequences include a non-violent "do this stealthfully or quietly" option which is an extra reward if you succeed; it just so happens that shooting your way through the game is the easiest solution most of the time.

4. you want a co-op game to run around in with a buddy.

5. You freakin' love Trek and are exceptionally forgiving, and you happen to think Zachary Quinto and Chris Pine make an excellent Spock and Kirk. 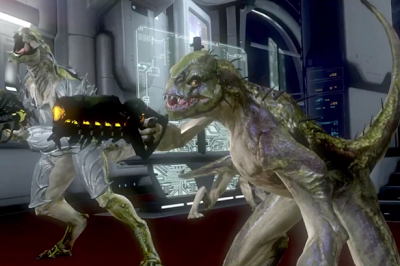