This movie, starring James Spader and Angela Bassett in a sci fi horror adventure first came out in 2000, and I recall watching in in the theaters and generally experiencing a sense of overall disappointment. Interestingly, now many years later I recently stumbled across a copy of the film in DVD for cheap and realized that I couldn't remember a damned thing about the film. Never one to take that as a bad sign, I decided to watch it again and see if it was really as unmemorable as it seemed to be, or if I was simply experiencing the "attitude of the moment" when I watched it before. Plus, being on a Prometheus kick lately, I decided to try it again along with Pandorum, The Thing (original and remake), Event Horizon, and a few others yet to come.

[Tangent: If you've ever tried enjoying a film while stressed, over-worked, poorly rested, off your bipolar meds, or "insert unusual physical or mental state here," then you know what I'm talking about....sometimes, something may come off as crap through no fault of its own, and maybe its the viewer that needs an adjustment. For my purposes, lets just say that I distinctly remember having a number of issues involving poor sleep from a work schedule that had me awake from midnight to noon every day, followed by an afternoon job that left me with enough time to either sleep for two or three hours or catch movies (and I caught a lot of movies). Somewhere in there I occasionally got some sleep, too. All while becoming diabetic without even knowing it (news flash! Poor sleep contributes to diabetes).]

So anyway: Supernova is a film about a crew onboard a rescue vessel called Nightingale 229, in a relatively undefined future universe that has the following post-Alien required features: sleeper pods, a means of FTL travel that is weird, a small crew of highly aggressive or distinct (and sometimes unstable) personalities, and a quirky robot that unfortunately comes off as a painful addition included by someone on the production who absolutely thought it was going to be cute or endearing or something.

Spader plays Vanzant, a recovering addict and all around troubled badass with a past who immediately starts acting suspiciously like a man looking to start trouble, though he eventually comes around and by the end of the film is revealed to be a fairly reliable hero. He is contrasted with a motley crew of cohorts, though the only other key character here is Bassett's Dr. Evers. The film is worth watching just for her performance; she pulls off the by now stereotypical tough, competent female spacer role quite well, and manages to generate some decent chemistry with the somewhat less reputable Vanzant. Though less prominent, the other actors in the cast (including Lou Diamond Phillips) are all pretty decent; no one particularly feels "out of place" as long as you subscribe to the "poor psych profile screening" theory of starship crew management in the sci fi film future.

So the rescue vessel's troubles start with a deep space distress call from a remote mining station on a planetoid (described at IMDB as a comet but for the life of me I thought it was a moon while watching). The planetoid is part of a solar system with a sun which is about to imminently go supernova. This must mean that they have FTL communication in the future of Supernova, because timing is everything to this plot.

So the ship captain orders an FTL "jump" in which faster than light travel happens through some sort of near instantaneous time-space warping wormhole effect. It turns out the stasis pods are actually designed to keep people "intact" throughout the jump, so they don't show up on the other end all scrambled. It's not entirely clear why people would get scrambled but the machinery and hull of the ship wouldn't....but, well, it makes for a nice Cthulhuesque touch to the process. Of course the captain realizes he has a malfunctioning stasis pod on board but rather than abort the jump he takes the pod for himself and pays for it in suitably grizzly fashion. This is "what the hell???" moment #1 in the film for me; it is not properly established as to why they couldn't just take a bit of extra time to figure out what was wrong with the pod. Also, for a rescue ship, you would think they'd have a few extra stasis pods for --you know-- people they rescue!


So with the captain a puddle of fused flesh, Vanzant takes over. They arrive (barely) at the mining colony and quickly discover a shuttle en route. On board is a single man named Larson, a seemingly young fellow who claims to be the son of a man Dr. Evers once had a very sour relationship with. Larson, naturally, is not all he seems to be...

So the movie moves onward with a premise that leaves you wondering just how this rescue vessel can really be all that useful when they seem to have so many problems on their own. Meanwhile the plot moves forward, leaving one with the suspicion that an alien of some sort ought to show up soon (or pop out of Larson), but it takes a decidedly different twist as things progress, with Larson getting creepier by the minute. When Vanzant finds a mysterious alien artifact that seems to warp time and space, it begins to have an effect on all the crew (at this point "what the hell" moment #2 crops up, as its not clear to me that the crewmen were compelled to check out the artifact....instead, they were just being stupidly nosy). Meanwhile, the imminent supernova serves as a persistent countdown to doom.

Supernova proved more enjoyable to me twelve years later than it did initially. The suitably weird, Mythosesque elements make for an entertaining variant on the "haunted ship in space" theme that has resonated for decades in film, and while it's certainly not in the same league as Alien it is also a cut above the average sci fi horror flick. Well...it's slightly better than garbage like The Core or 2012, anyway; and it smokes most SyFy fare.

Supernova's key strengths: good lead characters, odd choice of villain but it works, interesting weird mythos subtext, great FX (excluding some zero gee pod sex scenes), and a nice twist by not including an actual (knockoff) alien. I have no friggin' idea how I forgot about Angela Bassett as Dr. Evers in this one.

Supernova's failures: Some bad fridge logic moments (especially the stasis pod bit), the usual problem with a space submarine full of borderline personality disorders, and a robot that, while not as painful to watch as some other icons of hideousness in cinema is nonetheless entirely superfluous to the plot until literally almost the very end. 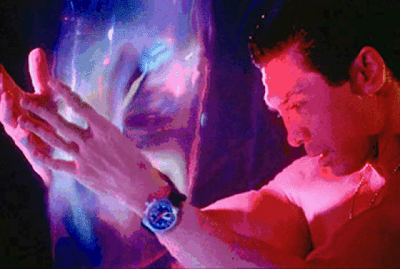