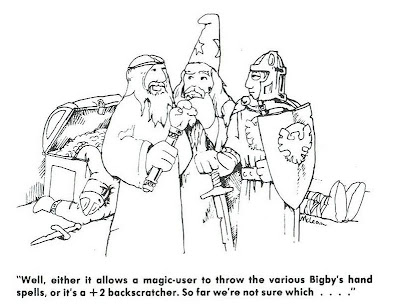 With Wizards of the Coast announcing their 3.5 edition reprints even as their 1st edition remasters are imminent, and with so many D&D-variant systems popping up every day (most recent of which is Dungeon Crawl Classics) I have to say the market for RPGs now seems utterly clogged with dozens of games all trying to do basic variants on the same thing.

I gave a fair amount of thought to the 3.5 edition situation, and contrasted it with Pathfinder. I realized I probably don't care to do anything with 3.5 (though as a collector I may still buy them, we'll see) as Pathfinder really has done more than I often give it credit for to advance the game in meaningful and structured ways. Pathfinder needs a "real" revision, I feel...an actual "Pathfinder 2nd edition" sometime in the future to give it its own credence as more than a 3.5 spin-off, but I am pretty confident that Paizo will do it right when the time comes, by simply cleaning up and advancing the actual system Pathfinder fans enjoy rather than ditching it for an entire revision.

WotC seems to be really bad at this for some reason. AD&D 1st and 2nd edition may have been different, but 2nd was clearly an evolution of 1st. 3rd edition was decidedly a different game that accomplished the same thing in meaningfully similar ways and so was fine, but 4E was a whole new beast (worthy of its own identity apart from D&D)....and my first playtest impressions on 5E leave me feeling that rather than building on what has come before they are instead reconstructing it, and fairly arbitrarily at that. So I don't have high expectations for the future of D&D right now.


Games like Dungeon Crawl Classics are fascinating beasts in their own right. I've finished reading DCC and I am keen to try it out, although I doubt the chance will ever come. This is a system which manages to capture D&D's essence but packages it in a unique fashion, a manner which stands on its own in contrast with both classic editions and retroclones alike. I might honestly be looking forward to the 1st edition reprints more if DCC hadn't come along. As it stands, DCC has stolen a bit of that thunder with a fresh take on a classic experience.