Races of Theliad and A Snapshot of the Divine Powers 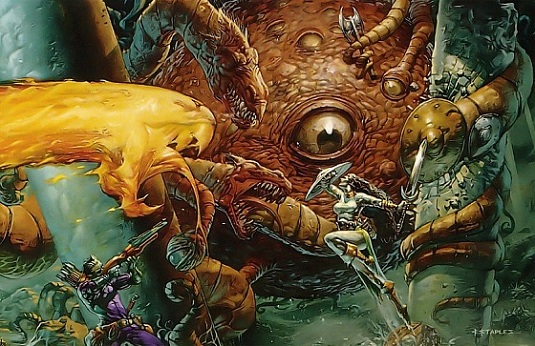 
Theliad is dominated by humans, but there are a handful of minor races that also predominate in the region. Notably absent from the land are dwarves, of whom the closest culture of such is southward in the Kossarit Mountains (of Galadur and Dalevar), and elves, of whom the closest such kin are in the region of Zamedia, south of the Crystite lands. The common nonhuman groups are as follows:


Ekarthaskans: The people of Ekarthask weathered a time when beast and man were on equal footing, and the desire to obtain the blood and power of the beast was a great desire among the early Ekarthask barbarians. Such was this desire that those who were born of mixed blood, called were-blooded became great warriors, and eventually a species in their own right. Lycanthropy, in which a man takes the shape of a beast, is still a common phenomenon in this land, and such shapeshifters are highly prized, often establishing themselves as great warriors and kings. Were-bloods, who can not change fully to beast form, are  adilluted by-product of this heritage. I'll feature more on were-bloods soon.


Lizardfolk: The lizardfolk of Theliad go by many titles, though as a species they call themselves the Hinursk. The hinursk have no common ground in unity or leadership, preferring small tribal relations spread throughout the land. They are friendly to trade and interaction with humans, but two thousand years of close experience have left the hinursk wary of what men are capable of. The hinursk themselves are not always trusted, for it is suspected that many of their kind are dedicates to the Cult of the Eleven.


Quick Details (PF): +2 Dex, +2 Str -2 Wis; low-light vision; have K/Nature as a class skill; gain a +4 bonus to stealth checks in their preferred environment; have natural proficiency with claw attacks that do 1D6+Str damage each.


Half Giants: The lesser giants of the land are a strong force, albeit too few in number to unite as a strong threat to any human land. The half giants make their trade in mountain towns and coastal villages, living amongst humans in small communities and relying on their fearsome appearance and reputation to keep trouble away. Half giants who become mercenaries are much prized.


Serpentfolk: The serpentfolk of Theliad are actually quite rare, but their appearance and reputation make them stand out when they do walk among men. Most of the serpentfolk come from the island of Ataraskis, where it is said that they have a city deep inland.


Tieflings: Although persecuted and often killed as demonspawn in Theliad and Akarthask, tieflings are nonetheless quite common, often coming from otherwise completely normal births of human parents. They are considered a sign of good luck in Nuliria, but are treated very strangely in Sytaris, where tieflings are believed to be evidence of some great wrong-doing in a person’s soul that must be undone through good living. This leads to harsh expectations of redemption for past lives for tieflings of Sytaris. In Ghurthal, where demonic worship is increasingly common, tieflings are viewed by some as infernal gifts, and some cultists will pay a couple handsomely to purchase their half-infernal children.


Halflings and Gnomes: as with everywhere else, these half-folk are found in proximity to human lands, dwelling in and enjoying the fruits of such. Haflings are most common in Nuliria and in the Islands of Nelindaros, while there are a few known colonies of gnomes along the northern coast in Ghurthal. Plenty of both can be found in the White City, Eristantopolis.

Half-Orcs and Orcs: The orcs are a true underworld denizen in this region, as the constant and vociferous warfare over the ages between their kind and men have driven them deep beneath the surface. Half orcs are very, very rare, and in the last century few of this species have been seen, save for occasional surface raids. Some wary adventurers have warned of the increasingly large forces of orcs and other underworld denizens that grow underground, worshipping Sultirios and the Eleven, but most men take such warnings with a grain of salt.


Doppelgangers: These mysterious shapeshifters are believed to have thrived at one time in Ekarthask, but long ago lost power and have been dwelling in secret among men ever since.