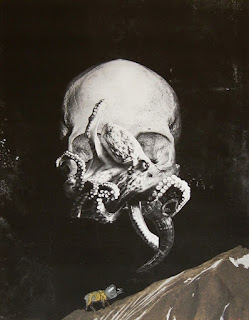 Yog-Sothoth has provided a podcast on the seminar featuring Paul Fricker & Mike Mason, authors of the 7th edition of Call of Cthulhu. I've listened to it and the following bits stood out, which I shall transcribe with commentary for those of you in a work environment where podcasts are not permitted:

The game has been "stripped back and then built back up again."

Changes to the fundamental rules have been made - four or five big key changes.

It will be backwards compatible.

Same game, making the same roles, but a matter of "how you interpret those rolls."

Core skill roll is unchanged. However, they are codifying in the game some sort of mechanic that defines how to interpet the skill roll, then they're turning Luck into a resource you can use to affect rolls (i.e. missed a skill by 3, so spend 3 Luck to fix that).

A "push the roll" mechanic for trying again on failed skill checks. This sounds to me like a codification of something most CoC keepers tended to allow anyway (in my experience).

Ditching the resistance table. They're moving to a model of success ratios that sounds to me a bit like what is presently in BRP. I'll have to see it in action; the description sounded to me a bit more cumbersome than the resistance roll table itself was.

On combat, they are implementing opposed rolls (sounds a tiny bit like Runequest 6). Attack/defense are being implemented into a single roll. A single "fighting skill," with more detail in training. Also, a firearms skill.

Hit points are changing a bit, in that your negative HP is now the death threshold.

Insanity mechanic remains largely the same, but they feel that the "I am now insane" threshold lacks guidance and leads to more silliness rather than dramatic/dark tension moments. Adding details on how this should work, providing more guidance on sanity and what happens when its gone. Inspired by fictitious versions of such (references 12 Monkeys) and suggest real insanity not so fun. Emphasis on hallucinations and bouts of madness. (This sounds to me like a way that I and other Keepers have run the game in the past; hallucinating PCs are a fantastic way to spruce up the insanity. It's also a good way to distinguish between modern notions of clinical insanity caused by debilitating mental problems vs. the kind of "I'm losing my grasp on reality as I thought I knew it" insanity the mythos should inspire.)

Introducing detailed "connections" rules. Good idea....the description feels reminiscent of aspects from FATE to me. A connection could be "dear old grandma," on down to "my trusty .38 revolver."

Connections and Luck "build up" together somehow it sounds like. A reward to encourage players to play up on their weakness connections, essentially.

You can gain connections through insanities.

"No rolls." So they are defaulting to either skills or back to the attribute scores to resolve issues. No middle ground anymore, apparently. Hmmm.

"Getting off track" and losing your way by missing clues will no longer be a "hotfix" for the Idea Roll (which is gone now) but instead details on better ways to structure the scenario will be provided to insure this sort of thing doesn't happen.

They are writing a Core Rulebook and Player's Book simultaneously.

Player's Book introduces ideas of Investigator Organizations (as a lead-in hook) with examples. (Probably a good idea, although not very Lovecraftian in the traditional way).

Mythos is losing some of (all of?) it's codification....sounds a bit like a sort of retcon on both the "RPGisms" that have put monsters in certain places and also a redaction of a bit of Derlethian influence. Hard to say, but probably a good thing, as it removes some of the implied organization to the mythos that isn't really there in the original stories.

Magic has been revamped. The spells have been reduced, many stripped out. Spells that were key to specific scenarios have been removed. Spells get a baseline effect with the potential for greater effects. Mythos creatures have an inherently better grasp of magic.

Streamlined, slimmed down core rulebook. Completely restructured and rewritten (except for key good bits). This sounds to me, honestly, like there's a drive to "compete" with the other alternative Mythos-based RPGs out there right now. Hmmm. I like my Fat 6th edition book, but I guess I'll wait and see what it all looks like. A cleaner organization couldn't hurt, but CoC has never struck me as overly convoluted in terms of the core mechanics in the past. Well, we shall see. RQ6 and how it worked out leaves me optimistic.

Playtesting? Yes, one playtester commented that it "works pretty well." (This is recorded in England, so that's a pretty decent compliment in the reserved British fashion.)

No traits. (What game has traits? Trails of Cthulhu?)

Other 3PP going to license for 7th edition? They have no clue.

No grappling (too complex we just didn't want to do it...a bit of a joke). Seriously though this is left more abstract/situational it sounds like.

"Still effectively a rules-lite system." Didn't set out to rewrite, but to refresh.

I am long overdue for running Call of Cthulhu again...I haven't run a regular campaign since around 2008 or thereabouts. Egads! Time to start a new one. Soon. One of my old diehard CoC/GURPs players is moving to town next month....that may be just the catalyst I need to revamp some CoC and GURPS gaming again, soon.