Continuing my week of the "Summer that Steam Took All My Money," I thought I'd offer some mini-reviews based on the first few hours of gameplay for three of my purchases. These are just "first impression opinion pieces," as I haven't sunk more than 2-4 hours into each game, but I figure that if a game doesn't captivate you in that period if time maybe its got issues of a bigger nature later on.....so read on!

I actually bought Serious Same 3 BFE a couple weeks back using a 75% off coupon through Raptr, but its on sale through Steam now and i just got around ot trying it out (also to see if it merited further investigation or should be deleted and placed in the "someday" realm of games I will get around to when I feel like it).

I wasn't a huge fan of the old Serious Sam games but I did play them (back on the PS1/2 iirc) and I do own some dirt cheap copies of the HD versions from a prior Steam sale. They're mindless shooter fun, nothing to write home about, and definitely require you to be in the mood for some brainless run and gun gameplay that is decidedly old school.

A public shame of mine (because I don't hide my love for it) is that I love Duke Nukem Forever. It's just new enough and just old school enough to be entertaining, and for whatever reason I find that the game has smooth controls and decent gameplay. The humor is crass at times, but a quick reload of the original was enough to remind me that this is what Duke Nukem was all about--the newest game was true to its roots, and that above all else was part of its downfall. So with that in mind, I decided to use that coupon and see if Serious Sam's latest offering worked in the same way.

As it turns out, yes and no. Yes Serious Sam 3 seems to be following faithfully in the footsteps of its two prior games (of which this one is a prequel) albeit with better graphics and a slight nod toward the need for more narrative framework typical of modern shooters (but only slightly). Otherwise, its still about moving through various maze-like environments, periodic open arena areas, and being swarmed by hordes of monsters that you shoot and beat up. I didn't get too far. I reached a midpoint around the third level and hit a nigh-unstoppable wall of cyclops monsters that was enough to convince me I should play this game in the far future when I was really, really in the mood for frustration. Which may be never....we'll see.

Verdict from a couple hours of play? If you liked the first two games this one should appeal. If you like old school shooters this is definitely in their ranks, with only a few caveats to modern shooter design. If you prefer to avoid frustrating combat situations that demand more twitch and less strategy, then avoid at all costs. 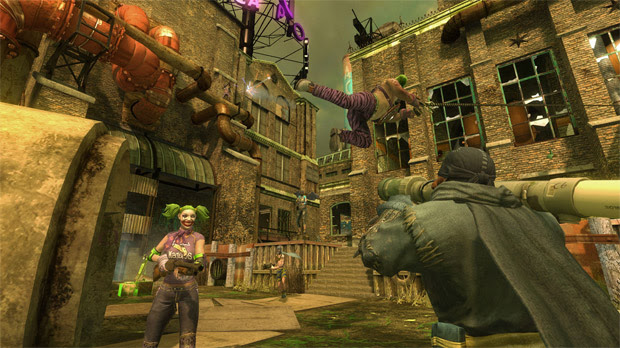 Once I got it connecting this game blew me away with how fun it was. It's a lot like playing Call of Duty Modern Warfare, in that the controls and "feel" are very close to that franchise. However, unlike CoD, this game has a sense of humor and a ludicrous but somehow workable premise. Basically, it's somewhere in Gotham City, and Batman is too busy to handle what is effectively a gang war on the streets between two groups: the Jokerz and the Batz, self-styled groups of maniacs who are pretending to do the work of or actually be their respective costumed idols. They do this with lots of weaponry, and some ludicrous gadgets such as gliders, spring-heeled boots, grappling lines, trampolines, roller skates and other bizarre contraptions. There's lots of conventional weaponry and (as is typical with the FPS multiplayer genre these days) level-ups and unlocks through XP gain. The game also offers loads of customization features for calling cards (what shows up when you off an opponent), mascots (floaty chibi-style "things" that look like popular Batman franchise characters) and other bizareness. One could imagine that the Jokerz and the Batz have been injesting a few too many mushrooms before going to war against each other.

Anyway, the result of all this is a game with all the gamification bells & whistles of progression-based game play, smooth and effective run and gun combat mechanics, weird and interesting movement options, a pervasive sense of humor that provides levity to a style of game known more for its serious military trappings, and a generally welcoming feel that I don't always get from multiplayer games. In fact, I was doing pretty well in my multiplayer matches so far, and the matchmaking was pretty quick. I never found myself feeling like a punching bag for the level 50 dog rapist, basically. Which is very good. 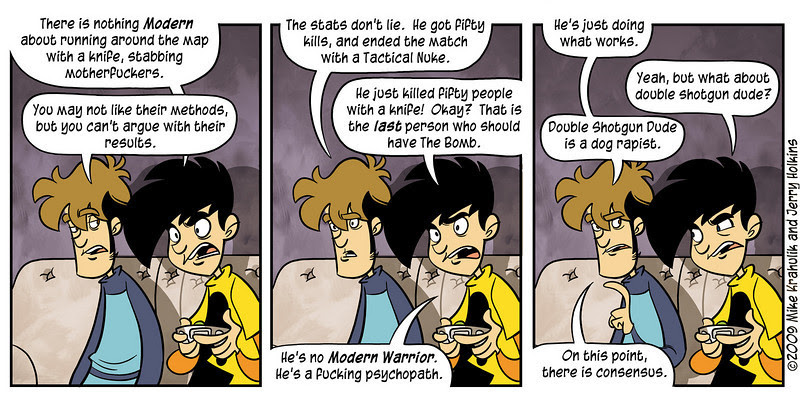 So who should play this, aside from me? Anyone who likes a clean, inviting and almost effortless multiplayer run-and-gun game experience with a sense of humor.

I thought Gotham City Imposters was the surprise game from my Steam purchases. Nope! It was one, yes, but Saints Row The Third crept in and occupied the same space, rather unexpectedly. I almost didn't get this game. I couldn't quite bring myself to buy a game with shark attack guns, sex-toy clubs and other bizarre items trumpeted so markedly as core features of the seemingly psychedelic gameplay. But, after some deliberation, I decided that maybe, just maybe, if I enjoyed the quirky nature of Gotham City Imposters so much maybe I ought to give SR3 a try.

As it turns out, this game is almost a deconstructionist approach to the action game/GTA sandbox genre, with a bit of dadaism* thrown in for good measure. Saints Row 3 starts you with a giant over-the-top bank heist performed by the Saints Row core gang (presumably from SR2, which I tried long ago but couldn't get into) on their own bank (or something like that)...but it all a mock heist, apparently, until real enemies show up and turn it into a blood bath (mostly for the real enemies). Before long you're on a bank safe being carried by a helicopter duking it out with dozens of armed SWAT guys while shooting at enemy helicopters. Then before you know it you're on an airplane....then off the airplane on a parachute in free-fall duking it out with dozens of foes while dodging falling cars. Then you're in the city, a city which has the highest crime statistics, accident rates and mortality rates in the freakin' world.

Every tiny bit of this game is over the top so far, in a way that basically says, "This is a video game, not a life simulation. Do what you will, it's okay. See? Shoot this gun. It fires chum, which then attracts sharks which come boiling up from the ground to eat the chum-covered foes. We can do that, because this is a video game world. The rules of logic are ours to determine, and you shall live by them."

So Saints Row 3 is the first game I've played in ages that has left me surprised and keen to see what happens next. It's all built in a GTA-style sandbox framework, so it's a world of "do as you will, and here are some plots in case you're interested." I got the franchise pack so I have all the sundry DLC that came out. For the price I paid ($25) it was well worth it....not entirely sure I'd have been willing to buy all this DLC if it wasn't on sale, although I am sure the three mission packs are worth it. I tried one of them, chasing after a clone of "Gat," the Saints Row leader or something....a lot of rocket-shooting passenger mayhem, but a bit tough for me at this early stage so I went back to the main plotline.

The shooting element of Saints Row 3 is third-person based and is mostly about killing them before absorbing too many bullets. It's not as refined as more dedicated shooters, and there's not a lot of cover use going on. It does, however, feel very solid and the game looks very good. And its hard to dispute the value-added element of having a gun which attracts sharks on land and another gun that fires sprakly mind-controlling cephalopods that take control of your foes. Seriously.

*The irrational element of dadaism....this game is definitely an irrational trip through chaos. However, the wellspring of anti-war feelings from which dadaism sprang are decidedly not a component of SR3, which embraces violent chaos with more gusto than Leatherneck at a lawnmower convention.
Posted by Doctor Futurity at 7:00 AM