The Movers and Shakers of Altavir

Many personalities dominate Altavir for power and domination....here are the key movers and shakers. Although I'm currently using Savage Worlds for my system of choice in this setting, the list below could easily make for a fine "Icons" list for a 13th Age game, too! 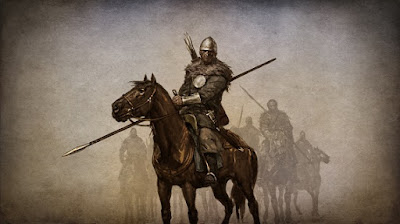 Major Powers and Personalities of Altavir

The secret powers of Altavir are neither as involved nor as impressive as the powers of other realms and Ages. They are the movers and shakers of this world…..but perhaps a bit more mortal and with fewer arcane resources than one might think. Still, their reputation precedes them.

The Black Mage Sarkindos: Sarkindos, ensconced in his tower deep within the Vapari ruins. The so-called “Black Mage” is one of the major threats to those who brave the straights of Acutum, as he sends out his monster-ridden ships culled from piracy to retain control of what he perceives as his “Black Empire of the Dead.” He is known to have allied himself with enigmatic demons known as the galadantas, a rival faction of demons who seem to have a strong desire to destroy the in’forge.

Tharagron and the Silver Blades: Tharagron, paladin of Malevig in the north, is a vile but righteous crusader who uses any means necessary to cleave foes and trumpet the cause of the fallen god of light. Tharagron believes that the Ice Gods of Death will be defeated if the lands of the Satras is unified under one single, glorious rule…his own.  He has an extensive order in his service, the legendary Silver Blades, which work to accomplish his designs as conqueror of the North.

Charados, the Lord of Nether: Charados, the last living Hapathic Sorcerer (now a Nether), may be the single greatest scholar and mage on the subject of the Nether in the world. He keeps largely to himself, realizing he is the last living direct descendant of his ancient kind, and is closely guarded –and served—by the in’forge demons which flock to him, worshipping him like a god.

Gorgonat, the King of Old Stone: Gorgonath, of the Barrier Mountains, is the dwarven king of the deep, a ruler without peer, at least according to the dwarves who trade with the human kingdoms. No one alieve, not even the dwarves, can claim to have held an audience with Gorgonath in his ancient citadel of the deep, and scholars in ancient Vapari ruins question whether the name is one passed down over the generations as it appears Gorgonath is identified often in ancient records believed to be a thousand years old (or more) as an ancient ally and sometimes cultic figure in Vapari myth and legend.

Tempestre, Queen of the Sylvanestre and Goddess of the Firmament: Tempestre, of the Elemental Woods is the “goddess of the firmament” according elven belief, and the Oracle of the Titans, the ancient elemental gods which the elves believe forged the world. She “manifests” in an elven woman who at puberty is given a unique rite of passage to contain the spirit of Tempestre, taking on her mind and personality as a result. The current incarnation of Tempestre is two centuries old, and more warlike than usual as she motivates her elvinkin to take up arms against the orcs of the north.

Emperor Saduum of Vidari: Emperor Saduun, of Vidari is the supreme regent and lord of Vidari, a firm ruler who keeps the seven provinces under firm control. With his council of seven and his Hall of the Senate the emperor comes off as a fair man who seeks prosperity for all. In reality his rule benefits the elite class the most, but he is deeply revered by the prosperous Vidari. Thanks to the relative isolation of Vidari it continues to thrive, fearing only barbarian attacks from the Ugadam and Hadarim, and piracy from the north.

The Dragon King Wrathos: Wrathos, who dwells in the Barrier Mountains is the enigmatic king of all dragons…or so he claims. An ancient wyrm, none dare oppose his will,  and both giant and dark elf bow to his rule as needed. The Dragon King commands an army of draconians to scour the deeps and enforce his will.

Eradonsos, High Priest of Sadaqua: Eradonsos, of Ugadan is one of the druid-shamans of the barbarian tribes. His cult is dominant throughout the region, his word as the Voice of the One True God is considered absolute. The wallowing “pits” which serve as temples to Ugadan, with great stone cairns at the center of a hollow depression are monuments of both deep faith and strange sin; the ways of Eradonsos and his followers are considered anathema by the civilized men of the north and east. Eradansos wants nothing more than for his cult to spread to all men, everywhere.

Satroth, Last King of Daskuun: Satroth, lord of ruined Daskuun is the depraved undead king of a dead city, who rules a populace of demons and the dead in a perpetual state of madness. He seems to have an affinity for when dark “things” awaken in the world and an insatiable desire to explore and control such awakenings.

Haladon, the King of Saredone: Halagon, lord of Saredone is the orcish warlord who has seized power and now wages war against the elves of the south. He is sworn to the Sons of the Dark, the seventeen devils which brought ancient Hapath to its doom. Unlike the men of old, the warlocks of Saredone seem to thrive in servitude to the Seventeen, and Halagon claims to be the bastard son of Simadasi, the Lamia Queen.

Lady Kerenath of Ateinas: Lady Kerenath, of Port Abnay is the ruler of this well-known southern port, the Vidari counter to Vadan in the north. She is also the enigmatic ruler of the cult of Ateinas, and claims to be a direct voice of the goddess. She is revered in the south as the chief priestess of the whole pantheon, and is consulted regularly by the emperor for advice. Her temples in the region are staffed entirely by women and actively seek to expand the cult base while dismantling or destroying the cults of other lands. The active priestesses, Templars all, are called the Daughters of the Red Lotus.

Ekarn, Lord of the Daggers in the Dark: Ekarn, the underworld lord of Port Giton, is regarded by many as the secret spymaster and dealer in the darkness. Some claim he works at the beck and call of the Emperor, others feel he clearly opposes the rule of the emperor and seeks to tear down the ruling class. His real purposes may be obscured by the fact that Ekarn seems to also run an organization known as the Daggers in the Dark, a guild of assassins that strike out and attempt to slay attempts to revive the lost culture and lore of Hapath and Vapari. They stand against the cults of the Sons of the Dark, as well as attempts to revive the worship of the older demon gods, and seek to destroy evil artifacts where they surface.

King Teneren of Vormanse: The most progressive and enlightened of the Northern Kings, Teneren has actively enourages southward expansion of his people by promising plots of land, women and treasure to any man who would lay claim to the wilderlands along the Straight so Acutum and swear fealty to him in his name. This has led to dozens of small and large colonies popping up in the otherwise non-human dominated region, and led to tension with Port Vadan, which is the staging ground for so many of these ventures. Teneren is actively opposed to the machinations of Malevig and its crusader.

King Metharoum of Port Vadan: the southern-most kingdom of the North, Port Vadan is a single great city on an island riddled with small towns from which this lone king rules. He is cousin to Teneren of Vormanse, and supports his cousin’s desire to conquer the no-man’s lands of the Terrano Abandonato. Metharoum is mid-forties, and harbors many illnesses, but his wife Serkatha is a sorcerer who uses her magic to keep him alive while she sends expeditions into the Hapathic ruins to find a cure for her husband of what she believes to be an ancient malady suffered by the Hapathic kings of old.

The Winter Death: The four death gods of the Northern Satras are enigmatic and terrifying beings. They are followed by ancient northern barbarian cults (the Agondias) which are related distantly to the men of Satras, but who have descended into cannibalism and madness. The will of each death god is always personified in one chosen champion, and that champion seeks to perpetuate the cause of the death gods, which seems to be the destruction of the kingdsoms of Satras and beyond.
Posted by Doctor Futurity at 6:00 AM