Review: Conarium - A Lovecraft Adventure that Won't Drive You Mad (well, it will, but in the good way) 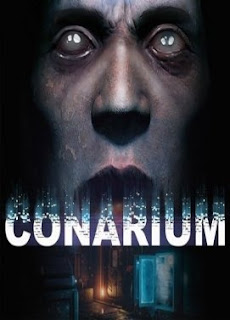 I actually snagged Conarium prior to the recent Steam Summer Sale so this has been sitting around for me waiting to get to it. I bought sight unseen, after reading it was a hard Lovecraft-inspired tale with direct influence from At The Mountains of Madness. Enough early Steam reviews suggested it was not horrifyingly bad....that was enough for me.

Well, my hunch paid off. This was an incredibly good game, a Lovecraft tale of horror, discovery, mystery and exploration all in the name of discovering that our frail mortal coils cannot handle the truth.

Conarium's tale is of a man...Frank....and Dr. Faust (aptly named, I must say), who have been part of an expedition to Antarctica funded to (among other things) investigate the antediluvian ruins of a lost age, one which you might imagine is the tip of the proverbial iceberg on what can be found in a Mythos Antarctica.

Besides the ruins, Frank is part of Dr. Faust's mysterious experiments with something called a Conarium. Coupled with a strange mixture of halluinogenic derived from salv divinorum, he and several others (it is implied, at least) have been inducing out-of-body experiences in a fashion which Lovecraft fans will quickly realize is resulting in events not unlike what we have seen in some other tales (such as "From Beyond.")

Frank begins his journey waking up in what appears to be a largely abandoned research base, with no memories (it just wouldn't be an adventure game with memories!) and a serious mystery to uncover as to where everyone went. As he dives deep in to the rabbit hole things get progressvely weirder and more disturbing, until ultimately his very life as well as sanity are both tested.

The game has some tried and true elements of the genre, such as: protagonist with amnesia, everyone is missing, and (most of the game) it's focus is on ambiance, horror, mystery and exploration.....but later on some very unexpected and horrifying threats emerge which will take hardcore fans of this genre by unpleasant surprise. Without giving anything away (spoilers by inference ahead) let me just reassure you that when "that time" comes run in a long, wide circle and be persistent.....run to escape and get out the way you came in, and be ready to do it twenty times in slightly different patterns until you do it right. It took me a while, but I got it....so can you.

Aside from that moment of hardcore action terror, the game is otherwise very consistent with its exploratory/mystery nature and is shockingly good at building slow, horrific ambience. It is also surprisingly stingy in its actual use of Mythos lore and creatures....we get interesting hints, glimpses and momentary, terrifying moments of certain things, but nothing in such an over the top manner that you are left feeling saturated. The ambiance must be good....my son was sleeping on the couch and woke up to tell me the game noise was making him scared (headphones went on around that point).

Overall I spent a bit under 6 hours playing the game and at the current price of $20 I'd say it was well worth it. If you love Lovecraft's Mythos, and you love adventure games, then this is a must have. A+ 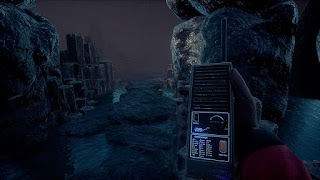 Five Spoiler-Filled Comments (you have been warned!):

1. If you get stuck this guy did a great speed-run which doubles as a good FAQ.

2. If you're wondering about the Mountains of Madness elements: the game focuses on the idea that long after the Old Ones departed earth and left their immense ruins, the serpent men created a necropolis to worship and revere them, and traces of the memory of this old empire of serpent men survived in surviving outlier colonies to be discovered. This game explores that idea in great depth.

3. The Conarium device of the game is stimulating it's namesake, the pineal gland, to allow its users to see into the other realms of space-time...and of course something else can see them back. There is one sequence which strongly suggests that this "thing" which can see back is what killed the Mad Arab (without actually stating such).

4. They were incredibly restrained in their use of the shoggoth, and when one does pop up...hoo boy, it was both a surprise as to where and a shocking moment (run!).

5. Frank's last name is Gilman. Siggghhhhhh. Very Lovecraft, Much Mythos. But yeah, almost as bad as putting Lovecraft into a game as himself....the game does not do the latter. In a weird inversion though Frank's last name does not appear to be relevant, and it is nowhere (in my playthrough, anyway) suggested he is from a small New England coastal town with exotic genealogy (Though I think the inference is that this is probably why his forays with the conarium machine worked where it failed for others).

Posted by Doctor Futurity at 1:32 AM