I've rolled up quite a few GURPS Dungeon Fantasy characters over time, though I have never gotten around to running GURPS DF. I'm hoping that will change with the imminent arrival of the GURPS DF boxed set from the Kickstarter later this year (fingers crossed). Here's the first of three I worked up, a sample if you will of what a typical DF character looks like.... 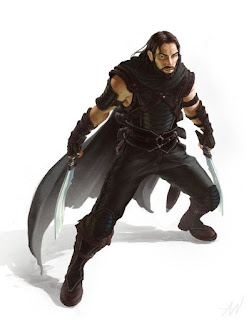 Seralon Galadastin is a rough and tumble sort of rogue who grew up on the post-war streets of Hyrendan, after surviving as a youth in a city ruled by the seditionist forces of the Betrayer King Makhorven. He's learned to survive during war time when the cruel soldiers of the southern seditionists would beat wayward urchins silly for fun, and later to thrive when the northern Emperor's forces occupied fallen Hyrendan, and the betrayer king was dragged to the bottom of his endless dungeons. He is simultaneously driven by endless amusement at irritating and provoking others even as his hard-bitten attitude drives him to assume the worst in life and others around him.

Recently Seralon stumbled across a duo, an infernal human with demonic blood named Volistaire Dartane and his comely traveling companion, the ebon dark elf sorceress Syraline Neredestyr. They spoke of forging a mercenary company, one which would seek out profit wherever it lay....be it in the heights of one of the betrayer king's abandoned castles or in the depths of the deepest dungeons. It sounded just crazy enough for Seralon to give it a go....

GURPS DF NOTES: I have an extended version of this sheet with all the skill stuff tracked (cost, formula, such) but that sheet does not like to play nice with blogspot's editing page, so I provided the condensed edition above.

GURPS as usual is skill heavy. The same character in D&D 5E would have Sleight of Hand, Stealth, Perception, and maybe Deception. This does contrast --sharply-- about just how much nuance is lost when you use a simple skill system. The downside is that the GM has to recall many, many more skill options when running a skill heavy game like GURPS....but I have a secret trick to this, in which (when a task is presented to the player) I ask them to tell me what skill they think works best for their situation, and then I'll see if I agree with their choice. It's not perfect (sometimes you gotta know the right skill and only that skill) but this is a good way of encouraging players to think about what they can do, within their wide array of skill options.

GURPS DF relies heavily on templates to help facilitate character generation. GURPS lets you build anything, but DF is all about channeling that do-anything design into familiar concepts, all of them essentially a riff on D&D style fantasy gaming. The templates are an important part of the process, and this character (and the ones I'll post next week) all use templates for their design. This is as close as GURPS gets to "class based design."

In the current form available at www.sjgames.com the DF rules suggest that it was originally designed to allow for dungeon delves in GURPS but that it was inherently representing an unsustainable, some would even suggest frivolous take on fantasy, as D&D style games are often characterized as such by those who prefer games such as GURPS, anyway.  My hope is that the new boxed set moves away from that characterization, or at least acknowledges that virtually all fantasy....from the gritty and bloody Song of Ice and Fire to the wildly out there Discworld are all equally improbable, and a setting about a world with an economy driven by dungeon delvers is no less or more improbable. By definition if it weren't then it would no longer be fantasy, but instead some weird alternative reality historical game or tale, anyway.
Posted by Doctor Futurity at 2:29 PM