It's been a while, but time to revisit Altavir, the mysterious new setting I am bandying about with an eye for some future campaign. Here's the last article, for reference. And now...the deities: 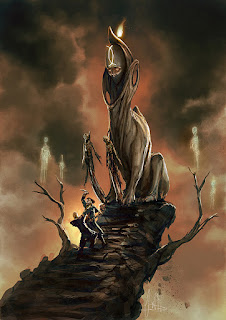 Altavir is dominated by five major cultural groups, including the dead culture of ancient Hapath and Vidari, so powerful in their ways that even long after their civilization was destroyed the memory of their gods lives on.

The religions of each region are not characterized by any sense of unity, though a number of gods are found in each region, the worship of such deities crossing cultural and political boundaries. Soragul is an ancient Vapari god, worshipped by the long-dead citizens of that ancient city, his grandest temple now in ruins…..but scholars across Altavir still present sacrifice to him before carefully kept shrines to this day.

The gods of Altavir are enigmatic and distant, but oracular communication, possession and even the summoning of the gods (or their aspects) is not uncommon. Sometimes charlatans pass themselves off as diviners, but other time there are those born with what appears to be a unique tether to the gods.

There is no consensus on the relationship of the gods to either man or other divinities, other than that such knowledge will always be beyond the ken of human understanding. The gods of Satras in the North are believed to be ancient spirits bent on destroying the world, frozen in their own wave of ice that will one day destroy the land. The Ekasian gods are benevolent spirits of growth and progress, while the Ugandan monotheism suggests a capricious, mad god rules all. The Vidari believe in many gods and spirits, but feel that they are not so powerful as to destroy a world. Behind all of this are the old gods of Hapath and Vapari, regarded as cruel demons of the outer void who would be best left alone, had the Hapathic sorcerers not drawn their attention to Altavir.

Vidaric Pantheon
The Vidari have a surprisingly mixed cosmology of the divine. The lead god of the Vapari is Sitarnos, a wizened patriarch of the gods who’s temples grace most Vidari cities as a center of commerce, trade and politics. They have Ateinas as the goddess who is both protector, fighter, child-bearer, a patron of women and the family. Heiros is the god of death, gate-keeper of the dead and the sole deity to hold back the demons of the Outer Darkness at bay. Other lesser gods include Ouduan, the god of the great sea and patron of sailors; Merecres, the god of secrets; Adreis, the goddess of love and tranquility, Eris, the goddess of chaos and discord, Targoaes, the god of soldiers and war; and the adopted Hapathic deity Soragul, god of scholars and magic.

Northern Satrasian Beliefs
The northmen of the Satras Steppes are a dour, stern lot who face an army of ancient, evil gods who are slowly engulfing the world in ice. Their tales of old speak of a cosmic battle in which the Death Gods won, and the old pantheon of light was destroyed. The four key death gods are Yzach, Vexor, Mavag and Thesha. Each is believed to have a legion of lesser undead gods, all undead servitors enslaved to them from prior worlds which they visited and slew all life on. The stories of Satras are that these four arrived as an army, and fought the old gods to a standstill, and the protector god Malevig fought them to a standstill before freezing them in perpetual ice….but as he did they struck and slew him. Now the death gods are frozen in the deep north, slowly awakening. The ice encroaches, for it has been taken over by the will of these destroyers, but one day they will shatter their prison and be free to wipe out humanity.

Most Northern homes and hearths have a shrine to the memory of Malevig and the old gods, and they believe that a candle or flame must burn at all times to keep his spirit alive, prolonging the inevitable creeping heat-death of the world that much longer.

Hapathic and Vapari Pantheon
Little is truly known of the old gods worshipped by these enigmatic and very dead sorcerers. The Hapthic belief in Soragul was found and restored in modern times by Vidari scholars, but other gods such as the elephantine Zaggal-Suun and the rapacious thousand-armed Mother of Darkness called Sibasha-Rei remain enigmas, with occasional misguided cults rising up to seek power from these lost beings.

Most concerning of all were the later cults which worshipped seventeen devils, the so called Sons of the Dark, possibly the children of Sibasha-Rei. It is believed this latter period of devil-worship and summoning was what led to the downfall of Hapath and Vapari. The seventeen are mostly lost to memory, but three devils in particular still have worship in hidden covens today, including Raggus the Black Goat, Simidasei the Lamia Queen and Policari the Breeder.

Sacred amulets, lost tomes and religious iconography are highly prized in the ruins of old Hapath and Vapari. Adventurers regularly plunder such relics to make a quick buck in their home ports. Occasionally one of these relics contains enough data, or some dark spirit, which accidentally rekindles the lost cult of one of these infernal beings.

Ekasian Gods
The Ekasian culture is believed to have grown from indigenous nomadic tribes out of the plains of the dead, the Oklos Emanos. Many ancient ruins of a lost civilization are found in that region, the name of which is lost even to memory, and the language of which is mysteriously untranslatable. The Ekasians believe they have a direct lineage to this lost people who likely predated Hapath by thousands of years.

The Ekasian belief system pays reverence to ancestors. Specifically they regard the ancestors of the ancient dead as guides in the afterlife and even the present lives of their people. The lead ancestral deity is called Nevuar, believed to be the first king of Ekasia, and spiritual guide to the Ekasian kings. Second is Mahulos, a spirit of magic and lost lore. Third is Tynorath, the spirit-goddess of wrath and justice. The fourth and final elder spirit is Makamion, the “maker of better things” who is said to be the ancestor to create all great works of man, the forger. Lesser spirits include Shanasia, the fertility spirit of women, Yamereth, the hearth-protector, and Trialion the spirit of mercantilism. There is a distinct evil ancestor spirit as well, known as Makkod, believed to be the last of the forgotten kings, the one who “brought ruin to the old age of men.”


The Ugandan worship the “all force” of the being called Sadaqua, which is simultaneously a benevolent and evil being of multiple “faces,” a sort of monotheistic being with pantheistic personalities. Sadaqua manifests as a devil, a savior, a trickster, a caretaker, a warrior, a sage and other roles, all represented within his dark, circular temples dug deep in to the earth. 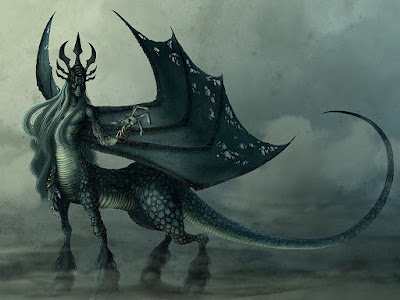