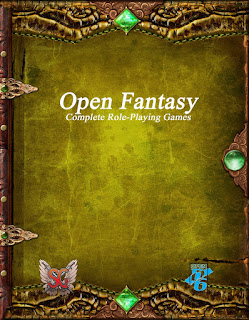 The D6 System has had a weird history, but it's always been a solid system with a lot of fans going back to the Star Wars RPG of the 80's, and these fans absolutely will not let it die....which is good! Because it's a good system, and a lot of fun.

Anyway, in it's last incarnation before death, West End Games released a variety of D6 System RPGs aimed at fantasy, modern and SF gaming. In fact those were all eventually released as free editions (right here). Each was a fairly decent game in it's own right, but suffered a bit (I felt) from being too much toolbox and not enough ready to go content. You had rules, for example, to construct lots of spells in D6 Fantasy but only a few actual sample spells to get you started. This meant there was a lot more prep up front in starting a D6 Fantasy game than was necessary for competing systems (like, ferex, D&D).

D6 Systems have languished in private fan projects for a while, and the Open6 and Mini6 systems are the most interesting examples of how fans have kept it alive and even transmogrified it in new direction. Along comes Open Fantasy from Anthony Uyl and Solace Games, which takes the full open content of the West End Games released and utilizes the OGL itself to flesh out the game into a much more robust one-book system.

The new Open Fantasy, as an example, includes more spells than I can count. It's mostly derived from the D&D OGL, so we're looking at a lot of D6-based interpretations of familiar content, but the mere fact that this includes a full, functioning magic system with tons of spell support is impressive, and instantly makes this an easier system both to run out of the box as well as to use to adapt D&D modules to.

There's also a shockingly robust monster section, which surprisingly does not do a lot to derive monsters from D&D....and also has a lot of non-western monster themes going on. I am impressed, to say the least.

If you're not familiar with the D6 System, then first: I'd love to come visit that rock you live under, but the short version is it's a die-roll mechanic built entirely on D6's, rather than hard stats. You would have a physique (strength) of 4D6+2, for example, rather than 16. When you take action, you roll your stat or skill dice and shoot for a target number. Most actions in the game resolve in this manner. Characters are not based on classes, so you have flexibility in design comparable to BRP, Mythras and other games. It's not level based, either....you earn XP to advance your die codes up the ladder of experience. Finally, it's a "reality based" set of mechanics where in you may get better at doing things but your combat expertise is based on skill, not hit points.....you can still die relatively easily. This means that in most cases the GM has more flexibility in how he designs encounters, and with what creatures....and deadly creatures are usually best dealt with through cunning or brute force (sheer numbers) rather than just by leveling up.

Despite the realistic element, D6 System still shows its roots in encouraging cinematic play, principally due to it's heritage as a Star Wars system originally. This is a bit muted in Open Fantasy, which emphasizes it's literary sources as a genre very well, but in actual play you can see how smooth the game is.

In addition to the other robust sections, I'd like to mention that the character race options are also incredibly robust. Each racial type has numerous subtypes (10 for elf, for example) and there are a lot of racial types derived from the OGL. A few are original, and a couple raised an eyebrow (I don't recall dragonborn being OGL anywhere, precisely).

The look of the book is utilitarian in design and filled with very familiar clip art, but ironically this makes the book feel "familiar" and comfortable all at once. Yes, I love utilitarian rule book designs, apparently....I like knowing approximately where to find information with the least amount of fuss, I guess.

You can grab it in print on lulu and rpgnow. The PDF is only $5 and honestly, if you were a fan of the D6 system at all I strongly suggest you check this one out. It's a great system, and this iteration of the fantasy rpg version is the most user-friendly, toolkit-friendly and most importantly: sufficiently robust to start running something with almost zero fuss and muss.

Posted by Doctor Futurity at 11:00 AM