Arkalor was a weird retro-addition to the history of Octzel. When it was first visited it was in the Warlord of Lingusia campaign, which took place in 3,500 AW. The ruins were identified as over 2,000 years old then. This version reflects the ruins as a six century old legacy of evil in Octzel, CA. 2092 AW, during the Age of Strife.... 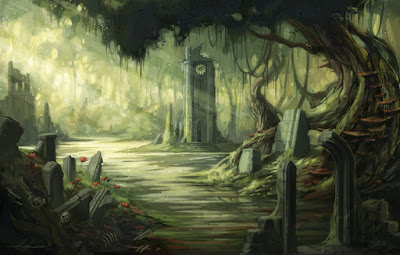 This ruined citadel and the vast and ancient city around it is steeped in mystery. The legends say that six centuries ago it was a seat of dark power, where chaos worshipping tieflings, eladrin, humans and orcs alike gathered to pay homage to the Chaos Pantheon. From its gates rode an army of black knights to crush the forces of Octzel and beyond, and it was a terrifying source of dark power. Little history from that dark period of time was recorded, though historians can tell you that Arkalor’s reputation was so terrible that when at last the city fell all reference to it was erased from the historical records. Neither its people nor its rulers are known today, nor why they chose to worship the Chaos Pantheons. Despite this, bardic tales and curious legends suggest the city itself did not fall to the blades of Octzellan crusaders, but instead was consumed from within by a plague of demons unleashed upon the land.
Today, the haunted ruins are a bane to all creatures living and only a handful of ogre tribes wander the region, daring to get close to the ruins in search of valuable relics. The ruins are known to be haunted by the dead as well as rife with ancient evils, and demons are believed to ingest the catacombs beneath.