Fun fact! Old Chegga was originally depicted in a module I ran at a Phoenix convention
in 1988 and again in 1989. The first scenario was written for use with GURPS 1st edition
and the play run lasted around 13 hours. The module was published in an issue of The
Sorcerer's Scrolls but (damn it all) I no longer have the original issue or even a copy on
disk or otherwise anymore. Since then I have had two campaigns in which Old Chegga
was revisited in new areas. Some day I will map the whole thing out. 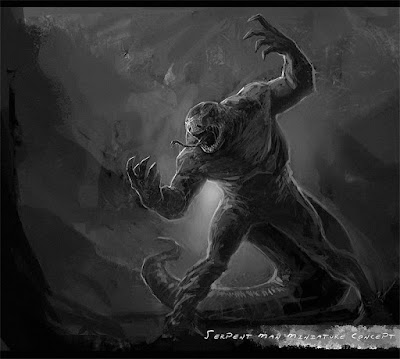 Six centuries ago Old Chegga was founded out of the waddle-and-daub mud huts of orcs who settled along the length of the vast and deep chasm in which the curious domain can now be found. These orcs found that the steep walls of the canyon sheltered them from most sunlight year round, letting them move freely between the lower dark and the surface world. These orcs were a strange lot, brought here in the search for an ancient, titanic entity called the Kraken, a name that failed to encompass the horror of what lurked in the vast caverns that adjoined the ancient canyon.

Chegga became a mecca for deviant worship of the ancient Kraken, and it is said that somewhere along its ancient walls stretched a passage that eventually opened up to one of the vast subterranean tunnels, miles beneath the surface, in which an ancient sea could be found, and within that sea rested a slumbering beast with the head of an immense squid and the body of a foul ape. The worship of this deity was tantalizing to some orcs, but to many more it was considered a sacrilege, an affront to the proper gods of the orcs such as Baragnagor, Orcus and Baphomet. In time, the orcish warlords banded against the cultists of Chegga and crushed them, leaving behind only the mysterious ruins and strange relics that they had unearthed in their time in the ancient chasm.

About two centuries ago the exiled sorcerer and vampire lord Karukithyak, once of the Haikyndyr serpent men in Galvonar to the south, arrived in the region and settled in Old Chegga. He was a follower of Slithotep, the mad god, and had been cursed with vampirism and exiled by his people for turning his back on Set.

Karukithyak has long since established a dark reign over Old Chegga, rebuilding the ruins and expanding the underground tunnels, recruiting followers from among his own kind as well as the degenerate local orcs and other foul beings in the region, including deep gnomes, grimlocks and ogres. Though he is a high priest of Slithotep and has taken a vast underground chamber in which to build an immense temple to the dark god, Karukithyak has encouraged the worship among his degenerate followers of the dreaded Kraken, and lets them continue their sadistic worship and sacrifices to the slumbering beast.

Karukithyak never leaves the subterranean ziggurat he had built a century ago, to serve as the temple of worship to Slithotep as well as his private meditation chambers deep within. He instead relies on his right hand man, the enigmatic chaos knight known as Gohondon Zar, a powerful and vile half-orc death knight who serves the vampire lord with ruthless efficiency. Beneath Zar is a network of enforcers who insure the strange ritual complex that is Old Chegga goes unmolested, seeking out rival orcs and other humanoids who take umbrage at the vile practices of Old Chegga by attacking them and exterminating them, then raising the dead in to more zombie soldiers for the vampire lord.

Karukithyak also has an uneasy hold on Baron Hroder of Galent, whom he turned in to a vampire some years ago. He knows Hroder schemes against him, rebelling against his own vile nature, but it amuses him to let the young vampire try and best his elder. If Zar had his way, however, he would mount an assault on all the human cities adjacent to Mitra’s Forest and exterminate everyone.


Old Chegga is a deadly underworld domain, and encounters in this region will be expounded upon more in due time. 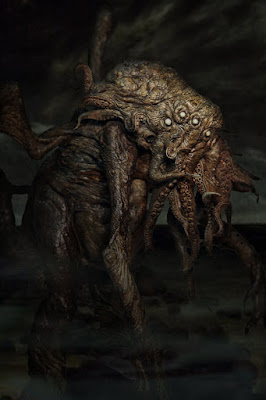