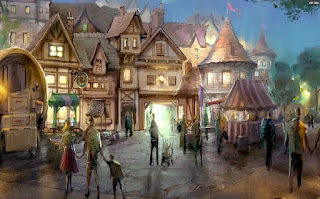 Although Gerton to the north is the capitol of Gremna Province, Galent is a more robust castle, and has long served as a center of trade for the farmers and ranchers of the southern province.  The Barony is ruled by House Kratim, of which Baron Hroder Kratim is the most respected member in the community. He is second in command behind Duke Kalios in Gerton should a defense need to be mounted against foreign or monstrous invasion.

Baron Hroder has a secret, however. East of his lands is the vast and untamed territory of Mitra’s Forest, and within that forest is the ruinous domain of Old Chegga, once an ancient bastion of chaos cultists and orcs, now dominated by the mysterious power of the vampiric Karukithyak. Some years ago Hroder sought to extinguish the vile forces that operated within the ruins of Chegga, and he failed, narrowly escaping with his life. What is not known is that he was bitten by the vampire lord, and is now in thrall to Karukithyak. For this reason along Galent proves to be exceptionally resilient against invasion from the orc-dominated woodlands, as Hroder’s inside knowledge of the monstrous lands gives him an edge.

Hroder’s effectiveness against the orc warlords is what makes him so valuable locally, but behind the scenes he is really being used as a pawn by Karukithyak, slaughtering the enemies of the vampire lord so that Chegga may be strengthened. Mindful of his tool’s usefulness Karukithyak keeps Hroder’s position as a reliable agent safe, to avoid suspicion.

Hroder is weakened in sunlight but does not suffer damage like regular vampires, for the curse of vampirism he received comes from a serpent man who was cursed by Set himself. Karukithyak’s kin are feared by many of the hidden vampire and undead enclaves throughout the land for this reason. However, should Karukithyak ever be slain, Hroder will no longer be in thrall to the vampire lord, but he will also lose his special resilience, becoming a  normal human vampire as a result.

Secretly Hroder despises Karukithyak’s hold, and worries that he is funneling great power in to the hands of a madman, one which worships a dreadful subterranean and aquatic being called the Kraken. He has, and will, continue to find quiet ways to defy the vampire lord, including hiring adventures discreetly to carry out assaults and raids against Old Chegga.

Galent is a military town, and it shows. Though only two regular garrisons of militia are maintained here (approximately 300 soldiers) it also hires and maintains an active mercenary company, and is one of the safe harbors for the rogue orcish mercenaries of Halshaggin’s Raiders. Three local knighthoods claim Galent as their home city, including the Order Triumphant, the Order of the Eternally Vigilant and a local office and tower for the Order of the Crown.

There are numerous inns, hostels, taverns and brothels, as well as spots of entertainment, including:

Before Chenetoz Forks became the popular place to hang criminals, there was the Crossroads of Galent. A long while back someone bought up the land and turned the region around the old hangman’s tree in to an inn and tavern called the Crossroads. The establishment is currently run by an ogre mage of indeterminate origin and who goes only by the name of Gus. Rumor is the ancient tree at the heart of the building is still haunted, and that a malevolent specter of a dead diabolist named Histior Lokenze manifests at least once a year, on the Eve of All’s Darkness, a night when the tavern never gets any visitors past midnight, except on a dare. In the last decade at least five foolhardy souls who paid to brave the tavern on that night and apparently perished of terror, or so it is said.

The truth is even spookier; this spirit of a mad diabolist does indeed haunt the tree, and Gus has sealed up the rooms and chambers immediately adjacent to its vast trunk, and warded them against the dead. Histior’s spirit manifests on the night of each new moon, though he is able to pass the wards only on the Eve of All’s Darkness, said to be the night when even the stars are eclipsed by the vastness of Death’s Realm.

The Serpent’s Coils is another well known establishment, run by the enigmatic half-elf woman Histeria, who raises snakes and dances a mysterious eastern dance with them. She trains a small group of professional dancers, and puts on shows that the local merchants and mercenaries pay good money for. Besides its dances, wine and drink the establishment is a renowned brothel, and it has its own secrets as well. At the center of the building is a great pit with an ancient giant serpent, said to be a pet and perhaps even a lover transformed of Histeria. Histeria herself is a mystery, exceptionally long-lived and of unusual nature; she is in fact a were-serpent, and once was one of the greatest assassins of distant Galonia. Even now she trains her finest women to serve as agile assassins for hire, using the serpent as their key weapon. She is also one of the few citizens of Galent to know that Hroder is actually a vampire.

Encounters in the Galent:
Encounter 14+
D20        Encounter
1-5          A major seasonal market and fair is underway for farmers, ranchers and villagers in the region
6-10       Galent’s mercenary company is hiring after rumors of orcish war parties surface
11-12     A local merchant is felled by a serpent’s bite; rumors suggest he died at the Serpent’s Coils, but Histeria seeks the aid of adventurers to prove this is not true
13-14     A band of local blades seek to rough up the fresh new faces in the city
15-16     Hroder is recruiting mercenaries for a special task; he reveals he intends to send them to Old Chegga to gather information on the cult of the Kraken
17           A wealthy nobleman intends to stay in the tavern on the Eve of All’s Darkness, and his wife hires the adventurers to protect him
18           The local graveyard is apparently having troubles with ghouls and risen dead, and needs help
19           The Halshaggin’s Raiders arrive in town on call from the baron, causing a disruption


20           Rumors of catacombs beneath the city draw the attention of a priest of Enki, who seeks adventurers to escort him to find and sanctify these catacombs 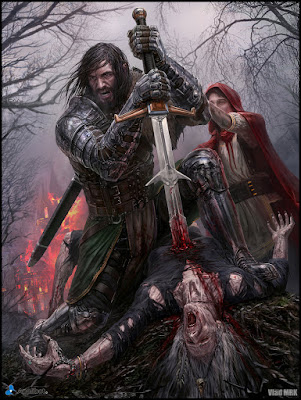 Posted by Doctor Futurity at 9:51 AM