Three more books from the POD option at dmsguild.com came in today: Ravenloft II: The House on Griffon Hill, Spelljammer: Goblin's Return and the first-time-in-print Scourge of the Sword Coast. I won't focus on the content, but instead on the quality of these print editions: 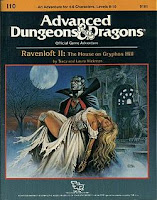 I couldn't resist this primarily because I never owned the original, and I always wanted to investigate the first module to outline Mordent, one of my top five domains in Ravenloft. The cover and binding of this module is great, and it's a bit thicker than the old 1E modules were, mainly due to being perfect-bound on heavier quality paper. The cover and back look great.

However, the interior looks a bit faded to the naked eye, although I noticed it less once I put the reading glasses on. The net effect is that some pages....many....just look a bit "off" in that way a print from a scanned copy tends to be. This is unfortunate. It's not bad enough to make me regret the purchase, however....or the advantage of an inexpensive new copy over hunting for one on ebay. The back contains reprints in color of the handouts and maps for the module, and they actually fare much better, being legible and useful. 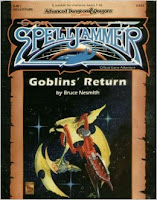 I owned this one long ago and ran it once. Like Ravenloft II, the module's color cover looks great, and it's thicker paper and perfect bound spine mean it looks just a tad thicker than the original (which was itself a big book at 68 pages including fold out ship cards. The cards are in the back, and remain in full color, albeit standard, slightly washed-out colors instead of the glossy cardstock of the original.

The print in this module suffers from the same problem as Ravenloft II: a bit light, and feels like a bit washed out in a "print of a scan" kind of way, but the problem once again more or less disappears for me with my reading glasses on so I'm not 100% sure it's me or the book itself. I'm leaning to "book" though because of the next module, which serves as a great control.... 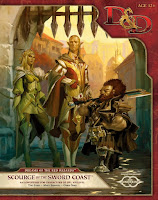 Scourge of the Sword Coast

This was the third module to be released in the 2013-2014 D&D Next playtest phase, which means its at once compatible with D&D 5E and also contains some interesting artifacts in its design from that formative phase of 5E, including some interesting monsters stats. The book's never been offered in print before, but it was clearly laid out and designed for print; the POD version looks awesome, and the version I got (the deluxe premium color paper) is crisp and sharp....and the fact that it looks so good and is also so readable is a good test to confirm that the lighter print of the other two books is a real problem, and not just an issue with my eyes.

I think for the price all three POD books above were worth it, but if you're a collector I'd keep hunting the originals, especially Ravenloft II and its large map of Mordenshire. For Goblin's Return, this module would be perfect if you want to run it....and more than sufficient if you're collecting Spelljammer for fun, but maybe not ideal if you want a "first printing" level of quality. As for Scourge of the Sword Coast....if you had the two prior print release modules from that era (Murder in Baldur's Gate and that other one with the drow elf and the crystal shards) then this is a must-have, and contains plenty of useful stuff to crib for 5E games.
Posted by Doctor Futurity at 6:00 AM