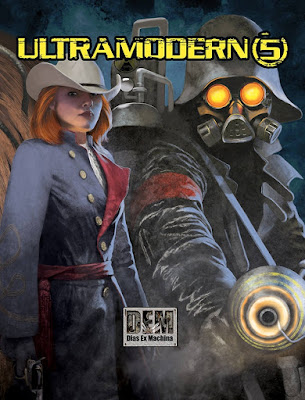 Ultramodern5 is a weird product. It's definitely a toolkit, and is full of useful content for creating a specific kind of modern or near-future SF experience to your D&D 5E-powered campaigns. It's published by Dias Ex Machina Games, who are also behind Amethyst, an RPG which tries to create a D&D-powered variant on Shadowrun-esque fantasy and future tech. Ultramodern5 borrows somewhat from that setting, but provides all of the content in a context-free environment, with two sample scenarios at the end modeling zombie apocalypse and alien invasion settings.

The core mechanical bits for U5 are introduced right off the bat, which is mostly a few new rules (such as for auto and semi-auto weapons fire), some skills and a few feats. The new skills include some basic crafting rules (engineering), which are serviceable and in the "scope" of 5E's mechanical depth. U5 also introduces a detailed lifepath generator that's kinda neat, and is strongly reminiscent of the old lifepath systems characteristic of R. Talsorian Games' RPGs (Cyberpunk 2020 and Mekton).

The core character generation rules are modified in some interesting ways: characters are defaulted to human in U5, and the rules, while allowing for other races or species, assume you're running a humanocentric campaign. As you read through the book, this will become increasingly evident just why this is so: the toolkit is aimed at very specific kinds of games.

Character generation now focuses on three items: a ladder, a class, and an archetype. The two new steps are designed to allow for a more customized class experience. There are seven ladders, which each describe a core conceit of your character, such as "born leader," "survivor," or "warrior."

There are ten classes, and these function more or less just like regular D&D 5E classes, with the caveat that they have left room open for the archetype (and ladder) to add level-acquired abilities. The classes include more task-specific skill sets, such as the Infiltrator, Gunslinger, Medic, Sniper and Techie. They are all fairly combat-oriented.

The archetypes replace the more class-specific format in standard 5E where you gain an archetype, domain, school or other specialist feature at 3rd level with any of the twenty-five archetypes included in U5. These are designed so that any class can pick from them, but some classes will naturally have a better synergy (and those classes are mentioned in the archetype descriptions).

As a result, you can get some really odd and interesting character designs out of this....but with the caveat that some will be mechanically superior combinations. For example:

Those are all viable (though not necessarily optimal) builds.

The next section of the U5 core rules consist of a massive amount of equipment, weapons, vehicles and armor with extensive details on various forms and types of power armor. It was around this point that I got the feeling the game was heavily influenced by the likes of Starship Troopers and Bubblegum Crisis. Notably absent from this section are rules on cyberware and wetware, as well as pretty much anything you could otherwise use to craft starships or more exotic SF vehicles. The equipment rules do include lots of high tech equipment and a bewildering array of high tech future weaponry, though. There's enough meat here to run a high tech near-future SF technopunk campaign, just minus the cyberware part.

As I was looking through the weaponry and armor rules it quickly became apparent that the game will feel incredibly deadly at lower levels (levels 1-5 most especially) but as things escalate and hit points grow, the damage dealing value of PCs and enemies will have an interesting impact on how high level play feels. If you get shot and take 78 points of laser fire damage, but you don't drop because your a level 16 grounder....well, I'll have to say I need to reserve my judgement on this until I try some actual high level play, but my intuition already is telling me that the feasibility of this in regular D&D 5E works best when you are assuming semi-mythic fantasy heroes, but I don't think that suspension of disbelief will work as well as one might think in a high tech future version of the same,

Aside from copious equipment rules, the book has an reasonable bestiary of foes (about 35 stat blocks) aimed squarely at the new-future technopunk thematics it is best designed for, and follows up with a section on adventure design that includes several "set piece" locations that are presented as archetypal encounter locations with enough info for the GM to run with as-is. After that are two scenario/setting locations: one is "Biohazard" which deals with a zombie apocalypse taking place in pleasant Happyland, and provides five additional zombie stat blocks. The second, "Invasion Proxy" deals with an invasion of aliens in Baghdad. Each  scenario could reflect a new world/setting in its pages, but they actually work just fine for a single campaign where weird stuff like this happens all the time and the PCs happen to be the special ops dudes who get to fix things.

There's some implication that you can use U5 to run all sorts of high tech, modern, western historical and other campaigns in this book. My take on it is that U5 works best for what I would call the "Tom Clancy/Michael Criton/toned-down William Gibson" futures, and has loads of gear and thematic classes to support such. For example, I had experimented a few blogs back with the idea of using Tom Clancy's The Division for a Savage Worlds campaign....but honestly, a setting like The Division would be a natural fit for U5. However, I don't think there's enough here in U5 for me to comfortably be able to run this as a cowboy western, for contrast....you could probably do it, sure, but it would require a lot of reskinning (so whether that's an issue for you or not depends on taste) of the existing content and careful vetoing of thematically inappropriate choices.

However, if you want to run a future tech setting with lots of hardware, maybe some power armor, and a general vibe that feels like "Bubblegum Crisis" mashed up with more recent films like Babylon A.D., Elysium or even Judge Dredd (the new one) then you are probably exactly the kind of person that U5 is going to really benefit.

I'm kind of hoping Dias Ex Machina puts out a sequel that includes starship rules, cyberware, wetware and maybe even some rules on creating aliens and biogenically modified humans and near-humans --not just the "people are special in weird ways" rules U5 offers, but actual simulant, android, and transgenic rules. If it adds these rules in, then you've got a great set of rules for handling just about any contemporary or future setting using the 5E mechanics to run hard-hitting techno futures with lots of potential for brutal firefights and investigation.

So who would get the most out of this book? I'd suggest that anyone who wants some near-future high tech SF (but without cyberware or starships) or modern gaming will find this a useful tome. It's the only thing we've got right now, and I think it would serve any number of possible modern or futuristic campaigns until (or if) WotC ever decides to cough up a revision to D20 Modern.

The pitfalls could be unintended synergies in the class/ladder/archetype design that lead to suboptimal characters for games where optimizing is preferred....and the other side of that coin, where certain optimizers dominate the game due to their character design. In my read through the game I saw plenty of ways to make a suboptimal character, although nothing egregious (if you're going for an rp-focued PC this will not bother you), but not many ways to make an optimal PC build. I think the stricter design focus, keeping people to three "moving parts" helped.

If you are a fan of D&D 5E and want a toolkit to add modern and future tech themes to your games, or design a new modern/future setting from whole cloth (that sticks within the scope of what this book offers) then I think you'll find a lot to like in Ultramodern5. If you're looking for a broader book in terms of theme, scope and options for design, then I think you'll want to wait to see if U5 comes out with a sequel, or look to other systems like GURPS which provide the largest pool of resources for what might suit you best.

I could also see this book working well for a "Dragonstar" style campaign. If you don't recall Dragonstar, it was a setting for D&D 3rd by Fantasy Flight which merged fantasy themes with a future space-fantasy empire, complete with starships, laser guns, dragons and more. Think Warhammer 40K circa. 1990ish and you've got a good picture of Dragonstar. You could easily use the setting from those books with the rules from this to do a space-fantasy themed D&D 5th; and maybe borrow the starship design rules from Dragonstar to hold you over until U5 gets a proper sequel with such, too.

For me, I'll definitely be using this soon. Probably for a post-apocalyptic style "future tech society that has collapsed" type setting. I'll provide actual play details on how well it all works together soon.