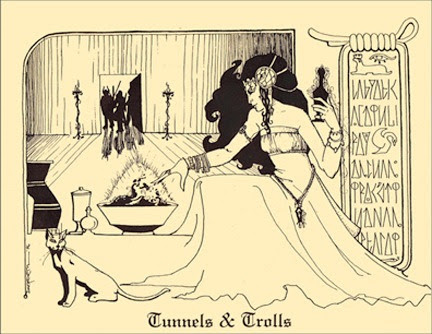 Just a "smidgeon of news to me" post for today.....too busy to do much more!

The Deluxe Tunnels & Trolls Kickstarter closed at $125,440, over 400% above its original goal. I opted in for all the print stuff I could plus the "vital spots" Tee. I predict a good year for new T&T gaming later this year! The release date goal is August, and hopefully Ken, Liz, Jim and the rest can meet that deadline. I hope Liz gets her tattoo sooner, though....! 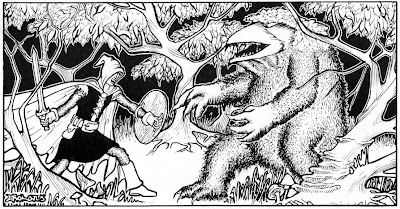 I finally caved and bought the Basic and Expert PDF's of Dungeons & Dragons over at dndclassics.com. A few brief comments from my perusing the documents last night:

1. the PDFs are really nice and clean, and the Expert set is indexed (maybe it was my reader, but I didn't see linking/indexing in the Basic book). The Expert PDF also includes a scan of a TSR catalog circa 1982ish. Pretty cool. If you remember the old D&D scans from then WotC was doing this before, keep in mind the quality of the scans has gone up dramatically.

2. I find it very amusing that when you get back to the Basic/Expert sets gnomes are once more delegated to the status of monstrous denizens, and the Expert set even includes a sample gnome lair....

3. Speaking of gnomes, I had also forgotten that in Basic, the gnoll was described as being created when a mad wizard crossbred a troll and a gnome! Fantastic stuff. Will be mulling over using this nugget in future games.

4. I have to concede that in terms of my appreciation for older editions that I haven't given enough credit to just how important Basic and Expert D&D was to my formative gamer years (even back then I tended to ostensibly play AD&D while in reality I was using AD&D for characters and monsters and leaning on B/X for actual rulings). Looking at them now, there is a strong temptation to break these bad boys out for a new campaign played By The Book. Probably will never happen, but they're loaded onto my Nexus now, so I'm prepared, should the need arise.

So anyway, if you're wondering if $10 is worth the admission to check out Basic and Expert Dungeons & Dragons, the answer is: yes, yes it is.

On other news, there's a new GURPS PDF out which looks really interesting: Underground Adventures is all about the fantastic world of digging deep into the earth, and the mysteries it has held (or was imagined to hold) over the ages. So far a great read and very inspirational. As with most GURPS supplements, this can work well as a sourcebook for your preferred game engine as easily as it can for GURPS 4th.