Ben Kuchera of the Penny Arcade Report has an interesting article on why he feels Aliens: Colonial Marines failed as a game sequel to the movies, and why making a game out of the films is so difficult, if not impossible. It's a good read and I am inclined to agree with much of it in principle, even if I am far less harsh in my experience with the game, having found myself not even noticing or being bothered by so many of the features that apparently drove Ben and others nuts. The alien behavior, for example....I did not notice or was not bothered by poor AI during the play. Was it there? I guess, maybe. Truth is, I was enjoying the ride and was not bothered that the game experience wasn't a precise emulation of the style and feel of the movie in that way....I pretty much just assumed that we were dealing with a story about a group of more experienced, less cocky and more well-informed marines who weren't as foolhardy as the ones from the movie. Unlike Ben, I guess I entered the game not expecting it to be an emulation of the Aliens film, but its own thing, spinning off from it, and using the medium of video games to do what it could to give us an experience in that universe.

That said, I bet the guys behind Dead Space could have nailed it.

Anyway, read his commentary, I think it's an interesting perspective and carries through with the previous games, although I am less inclined to agree that throwing predators into the mix has been a very useful story tool....and in fact feel that the AvP games and movies have largely been let downs to both franchises. 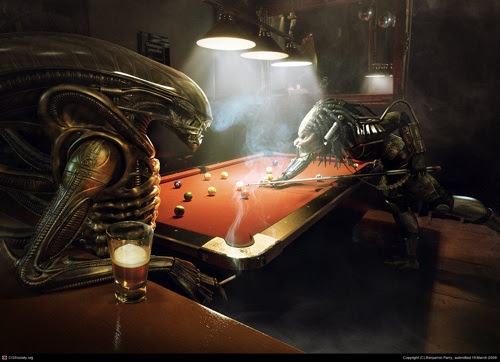 Posted by Doctor Futurity at 12:02 AM