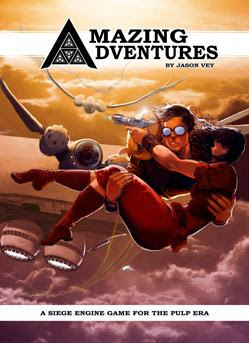 Amazing Adventures is the latest SIEGE Engine to spin off from Castles & Crusades. Prior to this release we have StarSIEGE, Tainted Lands (more of a C&C campaign setting but with a slim mini-rulebook included), and a kid's game called "Harvest" -something (no longer up on their storefront) involving anthropomorphic animals.

The core conceit of the SIEGE mechanics is as follows:

1. It's based on the D20 OGL (so roll a D20 and add something to resolve all tasks)
2. Characters get their six stats, each of which provides a modifier.
3. You designate certain stats as "primes" which means you get a bonus on your skill, save or action checks (which have a target number called a challenge class) related to those particular attributes designated as primes. In Amazing Adventures, you get three primes, and each prime gives you a +5 modifier to challenges. Challenge classes are a base DC 15. This goes up or down based on character level (added when using a class skill/ability), the challenge level (CL), and other factors. Most of the time these are pretty swift calculations.

Got that? Okay that's the SIEGE Engine in a nutshell. Everything else is crusty detritus surrounding the chewy inner core.

Amazing Adventures (AA) provides a pulp toolkit rule book using these mechanics to let players and gamemasters design pulp action adventures based on the serial films and fiction of the 20's, 30's and 40's. It's heavy on the rocket packs and light on the dragons and maidens....although it is fully compatible with C&C, so you can mix and match if you so desire.

Perhaps as a caveat to the author's tastes, or perhaps because its a product derived from a fantasy RPG  that is in turn the bastard child of yet another fantasy RPG, AA has a lot of magic in the book. The first two classes in AA are the arcanist and the gadgeteer. The arcanist is a triple class-in-one, a sorcerer supreme, or a mad cultist, or an illusionist maestro. It's the basic concept of the cleric, illusionist and wizard all rolled into one, depending on which prime stat you pick to govern your magical talent.

Arcanists get a resource called Manna Energy Points (MEP) which are used to power spells. As is traditional for retroclones and retro-inspirationals, characters don't just pay points and cast from an arsenal of spells, they have to memorize them in slots; rather than using slots to "pay" for spells like in C&C and D&D, the slots for AA are what's "in mind" and the expenditure of power is tracked with MEP. MEP is also gained at each level, albeit with a random D10 roll, so an unlucky arcanist could have a very low range of MEP over time. A GM who wants a low-magic setting without excluding it could arbitrarily raise or lower the min/max MEP gained per level, too.

Arcanists are a basic class, the core conceit of which is that he's able to cast magic, but the exact flavor depends on what the player wants or the campaign demands. Choosing the prime attribute (intelligence, wisdom or charisma) changes the flavor of the character as well. Beyond that, the only other real class detail is a familiarity with arcane lore. Customizing the class comes later, in the second section of AA, where we learn about generic class abilities.

Gadgeteer as a class is a catch-all for the guy with a lot of equipment that he seems able to pull out at a moment's notice. There are two flavors of gadgeteer: the guy who has someone else provide him with stuff (Batman, the Rocketeer) and the guy who does it all himself on the fly (The Shadow or The Green Hornet, maybe).

Gadgeteers get a number of build points that they spend on and tie up in their gadgetry. The first oddball "glitch" I ran into with AA was here, although its not a big one, necessarily; a player spends gadget points to buy "spells" which he then defines as a physical object (description left up to player and GM to hash out). Sometimes they are temporary (spent on the fly) and sometimes they are permanent. You recover gadget points spent on temporary devices.

A gadgeteer can only ever make on the fly gadgets that emulate zero level spells. There's not a lot of guidance on how, say, a prestidigitation gadget might work, or a mage hand gadget....is it literally functioning like the spell, or just mechanically? This is, admittedly, an old-school territory where such interpretations are up to the GM and the player to negotiate, but I personally would have been very happy if each spell entry had included a short description of what its gadget equivalent might look like.

The gumshoe is a bag of messy tricks, including climbing, investigation, revolver tricks, punchy take-downs, and an attitude. The gumshoe is the first of several more conventional classes, with a standard suite of C&C style class skills. The gumshoe eventually earns a built-in adversary, a certitude that his daring deeds will earn the emnity of someone, regardless of how many ventilated hooligans he leaves in his wake.

If I were to equate this class to one from C&C, I'd identify it with the ranger.

Speaking of hooligans, here's the actual class. The counterpart to the gumshoe, the hooligan is the rogue of AA, a rough and tumble medley of all the grifters, thugs, mafia men and tough guys you see in the era of the pulps. His main distinguishing trait isn't really even a class feature, being that this class doesn't usually lend itself to a lawful nature. Hooligans are another conventional "class skill" style C&C build, with a range of features that include dirty fighting take-downs, sneak attacks, casing joints and other tropes of the archetype. Yes, they are the modernized iteration of the C&C rogue.

This is the first unique class to the game, one which looks nothing like what has come before in C&C. The mentalist earns psionic powers, which are gained at specific levels, and can function very much like class skills. The entire concept is a great use of the SIEGE style class building process, with some extremely customizable options. Forget pulp adventures for a second....this class has within it the nuggest of a great Psiworld style campaign, something really cool and unusual. I would feel strongly tempted to eliminate the arcanist class entirely in a pulp era setting, directing players instead to the mentalist (and getting rid of the arcanist will make the gadgeteer that much more useful and distinct, too).

The mentalist is a concept that I hope future C&C books also seek to explot; it's something that could work well in a number of genres and contexts.

The pugilist class is what happens when you rename the monk class. I mean, its not an exact translation, but fairly close. The pugilist might work well in some capacity to model the fist fighting pulp warriors of old....I'd throw some levels of this class on the Phantom and the Shadow, for example (and Batman circa 1938 definitely) so as you might imagine this class is useful for that part of the venn diagram where comics and pulps merge. That said, its a strong, focused build class aimed at making the pugilist better with his fists than anyone else.

After the Mentalist we have raiders, those daring adventurers writ large by the likes of Doc Savage and Indiana Jones. The raider class is distinctly "pulp," not that the others aren't....it's a class that primarily exists in a specific frame of time and within the even more specific context of adventure fiction and film. Real world pot hunters and archaeologists are not nearly this exciting. Raiders have a medley of odd skills (cryptolinguist, disguise, climb, survival, traps, and a favored weapon) that just screams "Indiana Jones!"

The bard...er....the socialite is a clever manipulator and inspirational cheerleader. It's basically a reskinned bard, but with a tone and feel aimed more for a saucy socialite madame than a guy with a lyre and sword.

Now for a few other points to address about how AA works:

Class/Level Mechanics: in case it wasn't already obvious, this is one of those games where you start at level 1 and accrue XP until you hit level 2 and so on. This means that the classes dole out abilities and perks (like better hit points, attack bonuses and such) by level. A system such as this will feel uncomfortable to someone used to a more organic system like Hero or GURPS. As an example, under these mechanics if you did, say, want to build a gadgeteer who was emulating the Rocketeer, you'd need to get him to at least high enough level to build a gadget that emulates the fly spell. Then you'd need to argue with the GM about whether or not "fly" properly models the kind of gadget you have in mind.

(correction! Per Jason, and as I will point out next article, you ignore level restrictions on gadgets at character creation)

Alignments: Yes, alignments are baked in, albeit they could be rendered optional for the most part if you so desired. The alignments feel out of place to me, so I admit I'd have preferred a more modernized morality/personality mechanic, but YMMV on this.

Class Customization Options: A lot of the core class concept gets modified by additional optional class skills that you can swap out (or even spell slots/gadget points). One could be forgiven for overlooking this when studying the class options, but its actually the "meat and potatoes" of what makes the book really interesting. There are a huge variety of class abilities, detached from the classes themselves, which you pay for in ability swaps. Your range of options are more diverse than just feats; you can take the pugilist, for example, add the myriad animal related feats to get a Tarzan-like dude. You can (unfortunately) take the arcanist or gadgeteer classes and decide you don't really want to be an arcanist or gadgeteer and use their spell slots and gadget points respectively to bulk up on all sorts of optional class abilities. It's a weird and cool system all at once, but like with gadgeteers earlier, there's going to be a necessary give-and-take between player and gamemaster to insure that this system is not abused.

HUGE GRIPE: unrelated to the system, but as I was writing this the pages of my brand new book started to fall out. What The Hell. This  isn't Mongoose publishing, guys! Grrrrrrr. In their defense I have never had a Troll Lord Games book come apart before, but....grrrrr. Just. GRRRRRR!